First views of a comet captured directly from the surface by Swiss-built miniature cameras. 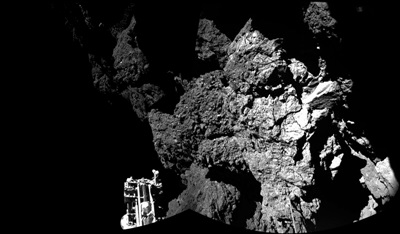 After a tense few hours waiting for communications to be restored, the cameras on board the European Space Agency’s Philae lander have sent back the very first pictures taken directly on the surface of a comet.

The dual-image mosaic, captured by Philae’s multi-camera “CIVA” instrument, shows one of the lander’s three feet in the foreground, on top of the rocky-looking nucleus of comet 67P/Churyumov-Gerasimenko.

CIVA, which stands for “comet nucleus infrared and visible analyser”, actually features several miniature cameras – developed many years before the first digital cameras appeared in consumer electronics – as well as a spectrometer to study the composition, texture and reflectivity of samples collected from the surface.

The lander also features a pair of stereoscopic cameras that should be able to send back 3D imagery in the coming days.

The cameras were actually developed between 1998 and 2001 by a research team at the Centre Suisse d'Electronique et Microtechnique (CSEM) in Neuchatel, and based on an earlier prototype resulting from a five-year ESA Technology Research Programme that began in 1992.

And 22 years later, the miniature high-definition digital cameras have proved sufficiently robust to resist the initial launch of the Rosetta mission, the extreme temperatures of the decade-long journey to the comet and Philae’s perilous landing.

CSEM says that before the miniature cameras were developed, space-quality imagers were typically the size of the entire Philae lander. Researcher Ivar Kjelberg said: “It was a gargantuan feat to build something so small, and many thought it was impossible. Luckily the watchmaking and microtechnical expertise found in Switzerland was up to the challenge.” 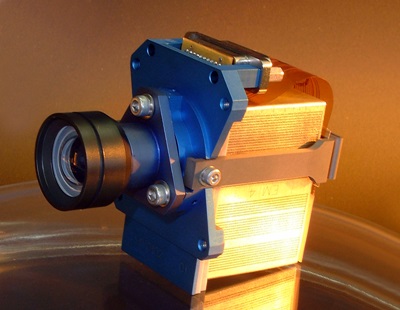 3D imaging
Each CIVA camera weighs just 100 grams, and is able to capture high-definition monochrome images – and could now be seen as something of a precursor to the now-familiar smart phone camera.

CSEM explains that there are actually seven identical visible-spectrum cameras on board Philae. Five of these are to take single images, while another pair will be used to generate stereoscopic 3D views of the comet’s nucleus.

Development and construction of the CIVA instrument, one of ten on board Philae, was overseen by scientists at the Institut d’Astrophysique Spatiale (IAS) in France, and funded by the Centre national d'études spatiales (CNES).

According to CSEM, the French team made three-dimensional stackable electronics that allowed for considerable size reduction, while CIVA’s optics, mechanics, software and communication module are all Swiss.

Another critical development was “Flextec”, a flexure-based assembly based on a single piece of titanium fitted with an internal spring machined into its structure. It enabled the precise assembly of optics and electronics while compensating for the expansion and contraction from extreme heat fluctuations that the instrument would be subject to during its journey.

Jean-Luc Josset, former project manager at CSEM for the ESA prototype camera and the CIVA cameras, said: “The development of this type of technology opens the doors for new, highly-demanding missions and is an exemplary of skills CSEM is able to offer.” Josset is now director at the Space Exploration Institute (SPACE-X).