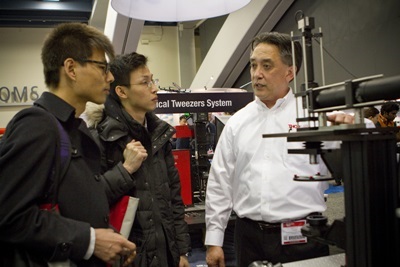 Component and system provider Thorlabs has continued its expansion up the photonics value chain with the acquisition of Corning’s optoelectronics research group – including significant expertise in quantum cascade laser (QCL) development.

And the company has immediately followed that up with a strategic partnership involving Daylight Solutions, the San Diego firm that has developed QCL-based products for infrared countermeasures and medical screening applications.

The Corning QCL operation, with which Daylight has already enjoyed a long-term collaboration, and related assets including intellectual property will now be transferred to Thorlabs’ semiconductor fabrication facility in Maryland.

The 60,000 square foot Thorlabs Quantum Electronics (TQE) site already houses QCL and related interband cascade laser expertise, thanks to the November 2012 acquisition of Maxion, and was founded back in 2009 when Thorlabs bought Covega Corporation.

Peter Heim, CTO and general manager at TQE, said in a company announcement: “Integrating Corning’s Advanced Optical Semiconductor Research Group into Thorlabs’ existing optical semiconductor fabrication facility not only allows us to ramp up the production of these devices and make them readily available for defense, security, commercial, and research applications but also adds a highly talented group of R&D technologists that significantly expands the depth and range of our core semiconductor laser competencies for future product development.”

Production overlap
The agreement between Thorlabs and Daylight will focus on applications in the defense and security realm specifically, where Daylight has worked closely with Northrop Grumman among others.

“The acquisition allows for Daylight to seamlessly transfer [its] six-year collaboration and partnership with Corning to Thorlabs, where the joint effort to define and execute on technology roadmaps, develop best-in-class QCL components, and test and qualify QCL sub-systems for commercial and military acquisition programs will continue,” Daylight announced.

As part of the integration strategy, the current QCL manufacturing equipment, facilities and staff at Corning will remain fully operational as full-rate production capacity is brought up at TQE. That will ensure a “significant period” of overlapping production of QCL devices while the business transition is completed.

Meanwhile Corning’s CTO David Morse added: “We expect that this acquisition will complement Thorlabs’ core competencies, market understanding and production capacity to enable them to accelerate their commercialization of quantum cascade lasers.”

The latest move by Thorlabs follows a recent expansion to Montreal, Canada, where a new research and manufacturing site is focused on making fiber-based systems for optical coherence tomography (OCT) applications.

That followed the announcement of a new business unit dedicated to ultrafast optoelectronics in Michigan, and the firm’s October 2013 acquisition of the flow cytometry specialist CompuCyte.

Last month, Thorlabs was among the photonics companies to pledge $30 million in private support to President Obama's Brain Research through Advancing Imaging Neurotechnologies (BRAIN) Initiative, under the umbrella of the new Photonics Industry Neuroscience Group.