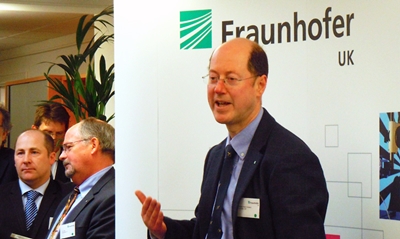 Martin Dawson, head of the Fraunhofer Centre for Applied Photonics (F-CAP) – the first Fraunhofer to be established in the UK – has given evidence to a Parliamentary committee in Westminster that is seeking to improve links between academia and industry in the country.

The House of Commons select committee for Business, Innovation and Skills (BIS), chaired by Labour MP Adrian Bailey, questioned Dawson in the first of what are expected to be several evidence sessions focused on business-university collaboration this year.

Bailey said that the enquiry wanted to find out how the UK could get “the most bang for its bucks” from such efforts, which in recent years have included a series of “Catapult” centers for innovation addressing a variety of market sectors.

Dawson, who is also research director at the University of Strathclyde’s Institute of Photonics and spent several years in industry with Sharp Laboratories of Europe, appeared at the session held January 28 alongside Graham Wren, a professor of business engagement at Strathclyde.

Germany’s Fraunhofer organization is held up as a leading example of the way in which university research can be translated into economic impact, and Dawson told the committee that a long-standing relationship between it and the University of Strathclyde was a key reason for F-CAP’s establishment there.

F-CAP growth
So far, it appears that F-CAP is making good progress on its promise to engage with local industry. Dawson told the committee that in its first year, F-CAP - officially opened in April 2013 - had won funding through eight Technology Strategy Board (TSB) and three European Commission FP7 awards, with ambitions to grow the UK Fraunhofer network to as many as four sites over the next few years.

F-CAP is also working on projects with ten industrial companies, mostly small and medium-sized enterprises (SMEs), and Dawson highlighted the ongoing development of a prototype mid-infrared sensing system with local laser firm M-Squared Lasers as a prime example of what had been achieved.

Questioned by committee member Katy Clark, the Labour MP for North Ayrshire and Arran, on whether the balance between funding of early-stage research and more commercially applied technology was correct in the UK, Dawson stressed that both were important.

“There is a wide consciousness in academia that research funding in the UK is falling behind its main competitors,” he said, adding: “Basic research will create surprises.”

Further questioned on what they see as the biggest obstacles to the successful cross-over of UK research into industry, Dawson highlighted the need to fully draw on the country’s academic force – which may be somewhat resistant to any move away from basic research.

Changed corporate R&D landscape
Other factors listed by Dawson were a relative lack of R&D spending in some key industrial sectors of the UK – with the notable exception of the pharmaceutical industry – along with the disappearance of major corporate and public-sector research labs in recent decades.

“We’ve lost something very important there,” Dawson commented, although he also believes that the Fraunhofer and various Catapult centers can go some way towards “reconstructing” that focus on the intermediate space that lies between the science laboratory and the production facility.

Wren agreed with that analysis, and said that the UK’s industrial research landscape had changed dramatically with the disappearance of previously highly influential entities such as the laboratories of GEC.

“The Catapults and Fraunhofer are a way of replicating that ‘connective tissue’ between academia and industry,” he told the committee - highlighting that while Fraunhofers typically focused on a specific technology area and were professor-led, the Catapults are intended to address wider industry sectors and societal challenges, such as advanced manufacturing or off-shore energy generation.

Wren added that the relative lack of cultural appeal of careers in science and engineering in the UK remained another significant problem, and that for the benefit of the wider UK economy “STEM” subjects must somehow regain appeal as exciting disciplines to study.

That lack of appeal has led to what he described a "dearth of skills" among the younger generation in the UK across key areas such as energy generation, nuclear engineering and off-shore wind power, while Wren pointed out that a key goal of all Fraunhofer centers is to produce large numbers of PhDs in applied technology.

The committee sat down to question Wren and Dawson just as the UK’s latest GDP figures were released. And while those show the country’s output to be growing at one of the fastest rates among the world’s more mature economies, and have been received positively in general, there remains a wider concern that the UK is still too dependent on the service sector and consumer spending to grow sustainability.