A new IMAX screen will be in place by year-end, while the company continues to develop its laser projection platform. 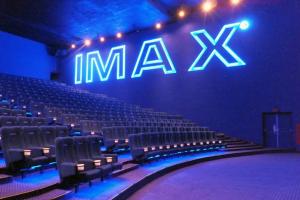 The Empire Leicester Square, one of the oldest cinemas in the UK, will be home to a new IMAX projection system before the end of 2013.

The cinema's Empire 1 auditorium, previously capable of seating more than 1330 audience members, was closed for the refurbishment at the end of August 2013.

It will be redesigned into two separate new screens, one being an IMAX theater with 750 seats. The other will be a new 400-seater screen.

"This underscores the momentum that continues to build for IMAX in Europe and the power of the IMAX brand as the premium entertainment option at the world's most renowned locations," commented Andrew Cripps of IMAX.

The Leicester Square IMAX installation will subsequently transition to the company's next-generation laser digital projection system, at a date yet to be specified. Currently under development, this system represents the next stage of IMAX's continuing integration of Eastman Kodak's laser projection IP, which it first licensed in 2011.

In February 2012 IMAX struck a deal with display-hardware specialists Barco to supply projectors to IMAX for the next seven years, an agreement initially covering Barco's xenon lamp-based digital projectors and their use in IMAX theaters worldwide.

Barco are now closely involved in development of IMAX's high-performance laser-based projectors. These are expected to begin rolling out before the end of the year, according to Barco's statement at the time the deal was struck.

Development of the next-generation system represents "the culmination of the largest R&D initiative in IMAX's history and will enable IMAX's largest screens to deliver the highest-quality digital content available with greater brightness and clarity, a wider color gamut and deeper blacks," according to the company's statement.

That goal implicitly address some of the concerns expressed by ticket buyers since the company first unveiled a digital projection system in 2008, a version developed as a complement and potential replacement for the format's initial use of 70 mm celluloid film.

As IMAX has opened new venues and become more involved in mainstream commercial releases, many of which now feature sequences shot in an IMAX format, some observers have noted that the screen-size and picture resolution parameters that were originally the IMAX hallmark have been downgraded in certain installations.

At the same time, potential hurdles to effective laser-projection have been a thorn in the side of developers. These have included the availability of suitable green laser sources, an area which remains the subject of much attention.

Laser Light Engines (LLE), one high-profile developer of laser illumination for digital projection and a past recipient of venture finance from IMAX, announced in March 2013 a deal with Elbit Systems of America specifically aimed at producing a green laser suitable for use in cinema display applications.