Industrial laser specialist says that there is still growth in the market for high-power CO2 lasers. 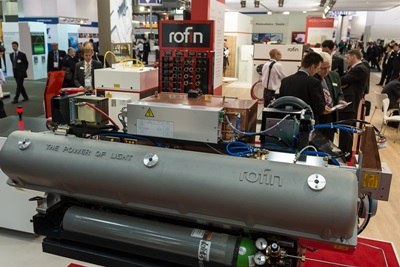 Sales at Rofin-Sinar in the quarter ended June 30 have exceeded expectations, thanks mainly to machine tool and electronics applications for the firm’s industrial lasers in China.

The company also reported a surprisingly sharp increase in unit sales of high-power carbon dioxide lasers, apparently bucking the widely held theory that the technology is increasingly being usurped by fiber laser alternatives.

At $139.1 million, total sales were up 6% year-over-year, and beat the upper guidance limit of $137 million predicted by the company three months ago. Net income of $8.7 million for the quarter was up very slightly on last year’s figure.

And while increased sales of fiber lasers are partly responsible for that increase, CEO Günther Braun revealed that unit shipments of high-power carbon dioxide sources had jumped 16% year-on-year.

However, with a major carbon dioxide laser project to cut oil pipes in China now winding down, and virtually no demand in the solar sector, Rofin’s management team has trimmed its sales expectations for the company’s current fiscal year, which ends in September.

Braun told an investor conference call that full-year revenues would likely fall between $547 million and $552 million, below the $550 million-$560 million range previously forecast.

“Global markets continue to be challenging and the slower pace of GDP growth in China might influence our business in the coming months,” said the CEO. “However, we believe that our solid backlog, combined with ongoing sales activities and focused efforts in Asian markets, will help us to deliver solid fourth quarter results.”

Fiber lasers
On the fiber laser front, Rofin is working hard to establish its own internal supply of high-power laser diodes by the end of the calendar year – seen as crucial if it is to be able to seriously challenge market leader IPG Photonics in the long run.

IPG’s vertical integration, focused approach and internal production of virtually all fiber laser components means that it is able to deliver massive profits – in comparison to its industrial laser peers – while still being able to lead on cost.

Braun illustrated that by noting that the average selling price of fiber lasers had declined by around 10% in the past 12 months, whereas the equivalent figure for carbon dioxide lasers, where Rofin has a stronger competitive hand, is more like 3%.

Braun added that just over a third of Rofin’s total fiber laser backlog of 363 units related to high-power products, and that the company had shipped some fiber laser products to “top-tier” customers for automotive applications.

For carbon dioxide lasers, the CEO said that although there had been an upturn in demand for high-power sources in the latest quarter, it is on the low-power side where more rapid growth in demand is to be found – thanks to applications such as structuring of textiles and organic materials.

• Rofin’s stock price remained largely unmoved following the latest financial update, with the company valued at a market capitalization of around $650 million. In comparison, IPG Photonics, which has a similar annual turnover but is much more profitable, is currently valued at nearly five times that figure.