Tiny thin-film cell made from copper, zinc, tin and selenium avoids use of rare and more expensive materials. 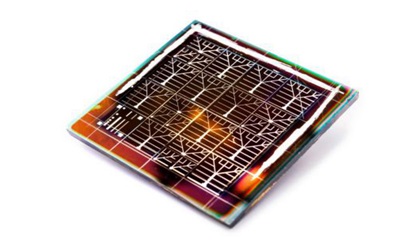 CZTSe: The route to sustainable solar?

European researchers will next week report details of a near-10% efficient solar cell that is made entirely from abundant elements, and which could in the long term provide a sustainable alternative to conventional thin-film materials.

Though the result is yet to be confirmed by an accredited laboratory, and the cell involved measures just a square centimeter in area, the team is hailing it as an important step towards bringing the solar industry closer to a sustainable alternative to CIGS thin films, which include the much rarer elements indium and gallium.

CZTSe, whose chemical formula is Cu2ZnSnSe4, has an electronic bandgap of 0.9 eV. In combination with the similar CZTS (Cu2ZnSnS4), which has a bandgap of 1.5-1.6 eV, the two could make for a combined material system ideal for a multi-junction, thin-film solar cell rivaling the higher efficiency of CIGS.

According to the US National Renewable Energy Laboratory’s chart of record-breaking solar cells, the best CIGS result to date is from EMPA, the Swiss Federal Laboratory for Materials Science and Technology.

While it developed a cell with a conversion efficiency of 20.4%, the best CIGS cells currently in volume production offer significantly lower performance, with Solar Frontier’s 13% CIS modules regarded as being among the best of their type.

20% efficiency plan
Imomec, imec and Solliance say that they have now defined a technology path towards further improving the layers and cell structures of CZTSe and CZTS absorbers, with the aim at developing a multi junction CZTS/CZTSe solar cell with 20 percent cell efficiency.

The CZTSe layers were produced by sputtering thin layers of copper, zinc and tin metal onto a molybdenum-on-glass substrate, before subsequent annealing in an H2Se-containing atmosphere.

The resulting polycrystalline absorber layers measure just one micron in thickmess, with a typical grain size of about the same dimension. Samples were then processed into solar cells at Helmholtz Zentrum Berlin, using a standard process flow for thin-film solar cells, and finished with a metal grid and anti-reflective coating at imec.

The highest conversion efficiency of 9.7 percent was obtained with a 1 x 1 cm2 cell, with a maximum short-circuit current of 38.9 mA/cm2, an open circuit voltage of 0.41 V and a fill factor of 61 percent.

The same NREL chart lists a 11.1 percent efficiency CZTSSe cell developed by IBM researchers as the highest-performing cell similar to that by the imec/Solliance collaboration. 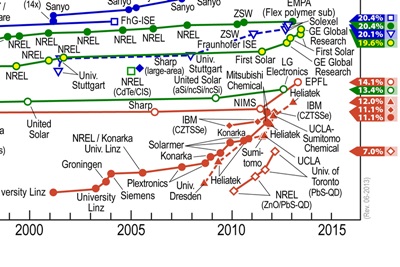 Marc Meuris, who manages the alternative thin-film PV program at Solliance, said in a statement: “We’ve been working toward this milestone since 2011, when we first started our research on alternative materials for thin-film photovoltaics.”

“Our efficiencies are the highest in Europe and approaching the world record for this type of thin-film solar cell, and we look forward to further advancing research and development to help bring to market sustainable energy sources.”