Mission-critical components made with selective laser melting could be 70 per cent cheaper, says the space agency. 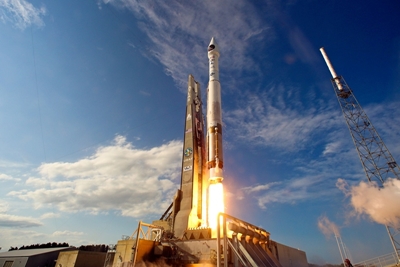 NASA says that it has recently completed initial tests on a rocket engine injector component manufactured by selective laser melting, and will now start working on a full-size demonstration of the technology.

Additive manufacturing, or “3D printing” as it is more commonly known, comprises a wide range of techniques – some of which use lasers, and some of which do not – and is more usually associated with the production of simple, less-critical components such as brackets.

In contrast, the injector component being developed by NASA’s industrial partner Aerojet Rocketdyne represents one of the most complex and critical in spacecraft design.

"Rocket engine components are complex machined pieces that require significant labor and time to produce. The injector is one of the most expensive components of an engine," said Tyler Hickman, who led the testing at NASA’s Glenn Research Center in Cleveland.

The team believes that additive manufacturing has the potential to deliver rocket engines much more quickly and cost-effectively than current production technologies.

They say that when manufactured with traditional processes, the injector would take more than a year to produce. With laser additive manufacturing, that time period is cut to just four months, bringing a 70 per cent reduction in cost.

A series of firings of liquid oxygen and gaseous hydrogen demonstrated that the injector component, which Aerojet Rocketdyne fabricated using high-power lasers to melt and fuse fine metallic powders into three-dimensional structures, could move on to the next stage of development.

"Hot fire testing the injector as part of a rocket engine is a significant accomplishment in maturing additive manufacturing for use in rocket engines," explained Carol Tolbert, manager of Glenn’s manufacturing innovation project. "These successful tests let us know that we are ready to move on to demonstrate the feasibility of developing full-size, additively manufactured parts."

A laser-printed spacecraft?
According to NASA, the injector component could be just the start of a revolution in the way that spacecraft are produced. Michael Gazarik, the agency’s associate administrator for space technology, said:

“NASA recognizes that on Earth and potentially in space, additive manufacturing can be game-changing for new mission opportunities, significantly reducing production time and cost by 'printing' tools, engine parts or even entire spacecraft.”

Jeff Haynes, Aerojet Rocketdyne's additive manufacturing program manager, believes that the injector represents a significant advance. "The injector is the heart of a rocket engine and represents a large portion of the resulting cost of these systems,” he said.

The Glenn and Aerojet Rocketdyne team partnered on the project with the Air Force Research Laboratory (AFRL) at Edwards Air Force Base in California. At AFRL, a unique high-pressure facility provided pre-test data early in the program to give insight into the spray patterns of additively manufactured injector elements.

GenCorp subsidiary Aerojet Rocketdyne says that the next steps in the adoption of the technology will involve the generation of scale-up and establishing production requirements.