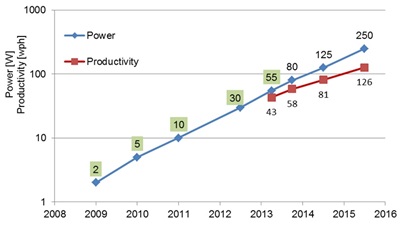 ASML has reiterated its confidence in the successful deployment of extreme ultraviolet (EUV) lithography by chip manufacturers over the next few years, with outgoing CEO Eric Meurice saying that the technology had “confirmed” its capability for the forthcoming 10 nm node in logic applications.

Key light source developer Cymer is now a division of ASML after the Netherlands-based company decided to in-source that capability following a period of under-investment in EUV. Cymer reported earlier this year that it had reached an EUV output of 55W – enough to support the production of 40 wafers per hour.

During a conference call to discuss ASML’s latest financial results, Meurice told investors that the light source was now “routinely” running at 55 W and with the sort of reliability and consistency needed for semiconductor fab operation.

Appearing on the call alongside new CEO Peter Wennink, Meurice added that even if the 40 wafers per hour mark was not increased over the coming months – and ASML is pouring money into EUV source development to ensure that this is not the case – the current EUV performance would be used anyway.

That’s because ASML’s logic customers would use EUV in the manufacture of at least one critical device layer, where the ability to shrink die size is crucial. The existing performance level would support the shipment of between 12 and 15 production EUV lithography tools by 2015, Meurice said.

But if ASML hits the commitments on its EUV technology roadmap, extending throughput to 69 wafers per hour by the middle of next year and to 125 wafers per hour by 2015, the technology would likely be used in as many as seven logic device layers, and tool shipments should rise to between 25 and 30 in the same period.

That power increase will rely on the introduction of a higher-power carbon dioxide laser and an improved "pre-pulse" trigger laser with which to generate the plasma and improve its efficiency.

EUV transition
Wennink said that customer interactions on EUV had taken on a “greater intensity” in recent months, as ASML worked increasingly closely with chip manufacturers to ensure that EUV would make a smooth transition to volume production.

After the initial deployment in logic chip production, EUV tools are expected to feature in volume production of DRAM memory devices from 2016 onwards. At that point, ASML is aiming to have ramped its EUV source power to 250 W.

ASML formally completed its acquisition of Cymer in late May, and included sales made by the division during June in its latest financial results.

Those results indicated total revenues of €1.19 billion in the financial quarter ended June 30, thanks to the sale of 38 lithography systems. Cymer’s sales for June only, comprising deep-UV (DUV) laser systems used in ASML’s and other tools, came in at €31.8 million. The cash generated by those profitable DUV sales is being spent on the development of EUV sources, Wennink said.

Mobile DRAM drives demand
Although the first two quarters of 2013 have seen ASML’s sales lag behind the figures posted in the previous year, that is all set to change in the current quarter, as foundry and logic customers move to what the company calls “very lithography intensive” technology nodes at 14, 16 and 20 nm.

With additional demand beginning to arise from the mobile DRAM memory market, Wennink believes that ASML’s sales could reach €5 billion for the full year, which would represent a slight increase on the €4.7 billion posted in 2012.

The first revenues from the company’s EUV tools are expected to contribute around €210 million to that total, in recognition of three shipped systems – although five EUV tools should ship by year-end in all.

“The first NXE:3300B [EUV] systems are in the process of shipment and installation at customer sites, as we progress to improve the performance of the light source,” noted Wennink. “In the second quarter, we established good performance, stability and reliability of the pre-pulse source concept at up to 55 W, and we therefore remain confident in our target of 70 wafers per hour productivity in 2014.” 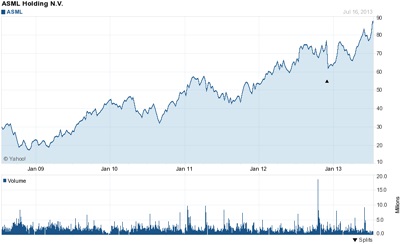 • Markets responded positively to what was Wennink's first quarterly financial update as ASML's new CEO, with the stock rising 1% in value to reach another record high of $89 in early trading on the Nasdaq exchange.

Now valued with a market capitalization of more than $36 billion on that basis, the company has now even eclipsed the highs seen during the technology bubble of 2000.