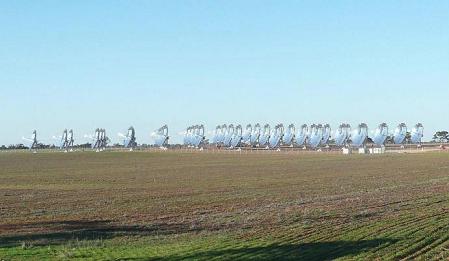 The 1.5MW plant is said to be capable of generating enough electricity for about 500 average-sized homes. The company, which is a wholly owned subsidiary of Silex Systems Ltd, Sydney, also announced that its construction of another demonstration facility in Nofa, Saudi Arabia is on track for completion by end of 2013.

Solar Systems said that complete operation of the Mildura and Nofa Demonstration Facilities will be a key step towards “establishing bankability” for wider commercial deployment of Solar Systems’ technology.

Silex CEO Dr Michael Goldsworthy commented, “The completion of the Mildura facility is a major step forward in the commercialization of Solar Systems’ Dense Array CPV technology. All 40 dish systems have been successfully commissioned and are operational, supplying green energy into the Australian national electricity grid.

“We are excited about the economic potential that our technology can deliver to Solar Systems and ultimately to Silex shareholders. If successfully commercialized, we believe that the deployment of utility-scale solar power stations around the world has the ability to generate hundreds of millions of dollars in annual revenues within a few years. This could be a game-changing renewable energy technology”.

The 1.5MW demonstration facility, based in Mildura, north west Victoria, is now fully grid-connected and providing enough electricity – under a power purchase agreement signed with Diamond Energy in 2012 - to power up to 500 average-sized homes. The facility will enable demonstration of commercial operation and reliability of Solar Systems’ proprietary Dense Array CPV solar conversion system.

The commercialization strategy for Solar Systems’ CPV technology includes the following steps over the next two years, all of which have already commenced: Operation of the Mildura and Nofa demonstration facilities to validate performance efficiency, energy yields and reliability; cost-reduction activities to drive the levelised cost of energy down to the key target of A10c (US9c)/kWh (or lower); commencement of the Mildura Stage 2 100MW solar power station project; securing of other opportunities (up to 50MW range) in Australia; and other solar power station projects in markets such as Saudi Arabia and the USA.

The 1.5MW Mildura plant received $10 million from the Victorian State Government plus additional funding from the Federal Government. Planning for the utility-scale, 100MW Mildura Facility is now underway, with construction expected to begin in late 2014, subject to securing a power purchase agreement and the finalisation of funding arrangements.

These include the following commitments which are conditional upon successful due diligence outcomes: A$75m (US$70m) from the Australian Federal Government under the Low Emissions Technology Demonstration Fund (now under the Australian Renewable Energy Agency – ARENA); and A$35m (US$33m) from the Victorian State Government’s Energy Technology Innovation Strategy Fund.