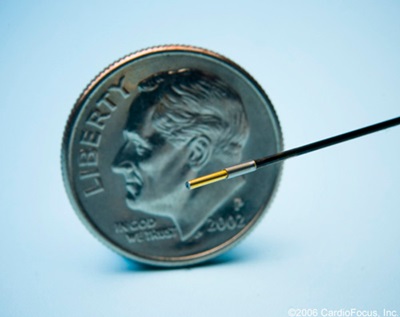 A laser-based treatment for people suffering from persistent heart palpitations has just begun a major clinical study on 150 patients in Europe.

According to the Massachusetts company CardioFocus, its “HeartLight” system, which uses laser ablation delivered via an endoscope to treat the condition atrial fibrillation (AF), the study will take place at five medical centers in Germany and the Czech Republic – with the first three patients already enrolled at Frankfurt’s Cardioangiologisches Centrum Bethanien (CCB).

The HeartLight system is already used in Europe as a treatment for so-called “paroxysmal” AF, which is a temporary form of the condition. Persistent AF is defined by the UK’s National Health Service as lasting for longer than seven days.

Although the causes of AF are not fully understood, it is thought to result from abnormal electrical activity in the upper chambers of the heart. These electrical impulses override the heart's natural pacemaker, which can no longer control the rhythm of the heart. This leads to a highly irregular pulse rate, causing dizziness and shortness of breath in some people.

The new study will be the first to evaluate pulmonary vein isolation (PVI) with balloon ablation catheters in patients with a persistent AF complaint. PVI treatment using radio-frequency ablation has been shown to be effective initially, although patients often require more than one intervention. It is hoped that by using laser ablation instead, the treatment will have a longer-lasting effect.

Randomized trial
Boris Schmidt, a physician at at CCB in Frankfurt and principal investigator for the trial - and a previous recipient of research grants from CardioFocus - said in a statement issued by the company: "The HeartLight System has been used with notable clinical success in the treatment of paroxysmal AF, with multi-center remapping studies demonstrating more durable pulmonary vein isolation than achieved with alternative catheter systems.”

“Previous research with radio-frequency ablation technology also suggests that PVI may also be an effective initial treatment for persistent AF, but due to high rates of reconnection, patients often require more than one intervention,” he explained. “With this study, we hope to establish initial data around the use of balloon catheters for this clinical application and lay the groundwork for further study of HeartLight in advanced AF treatment.”

In the randomized trial, 150 patients will receive catheter ablation with either the HeartLight system or a commercial radio-frequency system. Clinicians will then assess the safety and efficacy of PVI using HeartLight in comparison to RF ablation, as the role of balloon catheters in the treatment of persistent AF remains undefined.

Enrolment for the trial is expected to take place through May 2014, and the study will follow patients for one year after the intervention.

CardioFocus president Stephen Sagon said: "We are excited that our technology will be used in this groundbreaking study. European clinical experience to date has confirmed the clinical advantages of HeartLight's direct visualization capabilities and unique laser energy source; this new study will assess the value of achieving durable PVI in this challenging-to-treat population.”

10W, 980nm diode
HeartLight is also set to undergo similar trials versus radio-frequency sources in the US, with the enrolment phase of a study said to be nearing conclusion.

A year ago, a study of 56 patients published in the medical journal Heart Rhythm reported that 71% of patients treated with the HeartLight system were found to be free of AF problems a year after their procedure and without any need to take anti-arrhythmia drugs.

In April 2013, a multi-center study of 200 patients in the US published in the American Heart Association journal Circulation Arrhythmia and Electrophysiology concluded that 99% of the targeted pulmonary veins were isolated, and that the effectiveness of HeartLight was similar to other AF treatments.

The catheter procedure was found to be “reasonably safe”, with a low rate of complications known as pericardial tamponade (pressure on the heart muscle) and phrenic nerve injury (damage to a nerve connecting with the diaphragm and important for breathing).

The system developed by CardioFocus uses a 10 W laser diode emitting at 980 nm to ablate lesions connected to a patient’s pulmonary vein that are thought to cause the AF symptoms. The laser is used to ablate each of the lesions via the 500 µm diameter catheter for around 20 seconds.