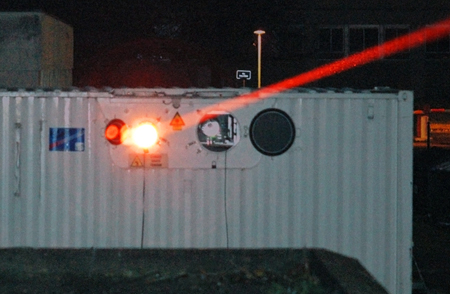 Can cloud formation, precipitation or thunderstorms be influenced by laser light irradiation? This issue is under investigation by researchers from KIT’s Institute for Meteorology and Climate Research – Atmospheric Aerosol Research (IMK-AAF), Freie Universität Berlin, and the University of Geneva.

The objective of the studies conducted by Professor Thomas Leisner, head of IMK-AAF, was to find out whether and in how far laser light and plasma can influence cloud formation.

The team has been investigating the interactions of laser light and ice clouds using the unique AIDA aerosol and cloud chamber on KIT’s Campus North. The results of these studies have been published in Proceedings of the National Academy of Sciences of the USA (PNAS).

The initial objectives of this research are academic, says Leisner, but with progress in laser technology, remote sensing of water vapor and saturation might become feasible. From such an application, weather forecasting could benefit.

For their investigations, the researchers used the facility AIDA (Aerosol Interactions and Dynamics in the Atmosphere) on KIT’s Campus North and the mobile laser lab “Teramobile” developed in Geneva and Berlin. AIDA offers unique possibilities of studying aerosol and cloud processes under atmospheric conditions and can simulate all temperature and pressure conditions occurring in the lower and middle atmosphere.

The Teramobile laser, built by Thales Laser in 1999-2000, is the first mobile terawatt-class laser system in the world. It is a Ti-Sa CPA chain system. It is embedded in a mobile optical laboratory in a 20-foot long container, to allow field operation. During the experiment, it delivered 170-mJ, 60-fs pulses (about 3 TW), centered at 800 nm, at a repetition rate of 10 Hz.

The Teramobile generates high-intensity laser light pulses. Unlike normal laser light, these pulses propagate in a specific way in the atmosphere. “Due to nonlinear optical effects, these laser pulses kind of produce their own light guides, thus remaining sharply focused over long distances even if they would normally be dissipated by airborne particles and atmospheric opacity,” explains Professor Thomas Leisner. A current-conducting plasma channel forms as the air gets ionized along the laser beam. 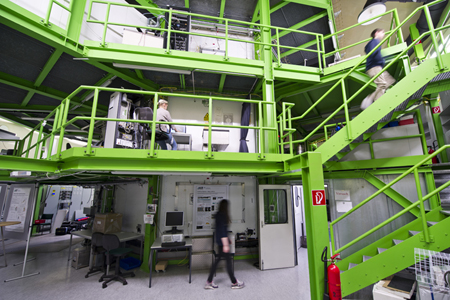 Effects of plasma channels on ice formation or precipitation processes could not be proved in typical storm clouds, where ice crystals and subcooled water droplets coexist. In high cirrus clouds, which consist purely of ice crystals, the researchers, however, came across a surprisingly strong reaction to laser irradiation.

As described in PNAS, the laser pulses increase the number of ice particles by up to a factor of 100 within only a few seconds. The fact that, in that way, the optical density of the cirrostratus clouds is intensified by up to three orders of magnitude makes the clouds look much brighter. “The effect exerted on a typical thin sheet of cirrostratus clouds can be imagined to resemble laser-written contrails,” Leisner says.

According to Professor Leisner, however, this laser effect on the atmosphere presently can only be applied in scientific cloud research. “Until clouds can be manipulated from the ground,” the KIT climate researcher explains “much progress is required in laser technology.”