“Powerful options are before us,” Arati Prabhakar tells the SPIE Defense, Security and Sensing Symposium. 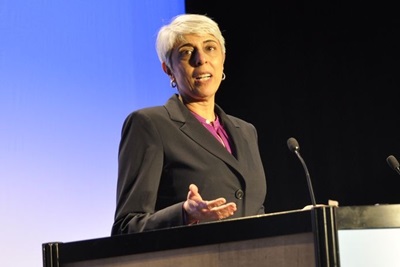 In a wide ranging plenary, she spoke of major benefits from DARPA’s 55 years of research and development of new tools to assist the US military – highlighting photonics technologies such as night vision capability – but also of the need for innovation, realism and commercial interaction during a period of shrinking budgets.

"The future is full of photons" - Prabhakar's DSS plenary presentation in full:

“Please bring us your great ideas,” Prabhakar told the defense-oriented gathering at the Baltimore Convention Center. “Really powerful options are before us.”

Among the current hot topics, she highlighted “Big Data”, like the Nexus 7 project for Afghanistan; turning to biology to develop new molecules for cellular engineering in the Living Foundries Program; and work on the human brain to help injured soldiers cope with prosthetic limbs.

In one video, Prabhakar highlighted multispectral imaging, showing how enemies that would be otherwise well hidden in bushes could be revealed in dramatic fashion through the use of four “night vision” spectra.

In another, a former soldier volunteered for a test in which she allowed her brain to receive signals from a computer to move a prosthetic arm up and down, shake hands and even give an interviewer a playful fist-bump.

After the speech, David A. Whelan, head of Defense, Space and Security at Boeing and co-chair of the DSS symposium this year, seemed to speak for many when he said that, to him, her message was simply, “How can we attract the people that are zealots for new ideas, and how can we get them to come to DARPA to help create a more vibrant future?” 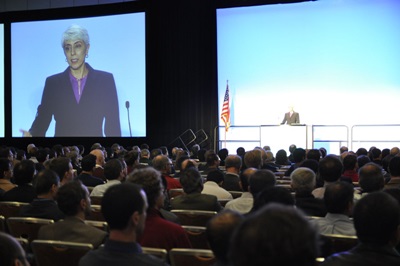 Reaching out to industry

“Owning the night”
On the specific topic of night vision, Prabhakar said that US forces now “owned the night” with their capability. “We made the early investments to show the world what was possible, to light the spark that led to each of these big fires. Now what has changed is the world we operate in.”

Today, she added, the enemy includes diverse actors: national states as well as criminal and terrorist organizations and individuals, all with access to cyberwarfare capabilities. Meanwhile, DARPA will have to make do with fewer resources, pinched not just by sequestration or other budget cuts, but by longer-term trends.

For the future, Prabhakar said: “It will become mandatory to find lower-cost solutions, to accept modest costs, but to impose massive costs on our adversaries.”

Asked whether she saw a need for greater efforts to reach out to the commercial sector amid the prevailing mood of sequestration in Washington, DC, she answered: “That bridge has to get built. The US must learn how to reduce the cost of prototyping and to really change the cost equation.”

Stark fiscal future
In an earlier press briefing for Washington correspondents, Prabhakar sounded similar themes and, taken together, the two presentations signaled a stark fiscal future for DARPA, well beyond the 2013 sequester with its $46 billion in mandated Pentagon budget cuts.

For now, says the agency director, sequestration will impose an 8 percent cut across DARPA’s programs, and will necessitate furloughs. Of DARPA’s dozen major program elements, each will absorb across-the-board cuts, with managers setting priorities to reduce their impact.

“With cuts of that magnitude taken halfway through the fiscal year, we’ve had to make cuts and delays in contracts and grants that we think are core to what we are trying to do,” she admitted.

“It’s not a death blow,” Prabhakar said, although she described the one-time cut as “quite corrosive” and something that, over time, would erode the agency’s ability to fulfill its mission. DARPA’s budget for 2013 is $2.663 billion, under sequestration.

Beyond that, emerging fiscal constraints may be a continuing reality. “We believe we may be at the beginning of a fundamental shift in how our society allocates resources to the business of national security,” she said, suggesting that a new pattern of defense spending may emerge in decades to come.

As the US emerges from a decade of war in Iraq and Afghanistan, Prabhakar said it is time for DARPA to reconsider its future operational plan. A summary of that plan, called “Driving Technological Surprise: DARPA’s Mission in a Changing World” is posted on the agency’s web site.


Threat proliferation
With growing fears that the proliferation of technologies such as drones will present future security threats to the US, Prabhakar warned that most of the technologies on which the US military relies are now available to everybody.

“That’s a trend that we expect will continue,” she said. “I think that’s going to be a fact of life.”

While cybertools and electronic warfare will underpin much of DARPA’s future activity, Prabhakar said that a new suite of technologies for position, navigation and timing were also crucial to making US forces less reliant on GPS. In terms of areas where photonic sensors will be mission-critical, robotics is another key theme for the agency.