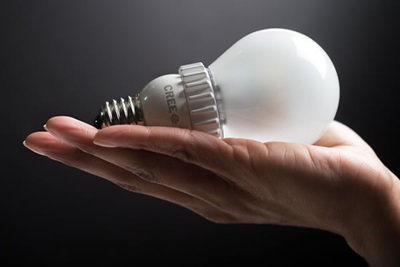 Cree, the vertically integrated manufacturer of LED lighting products, has delivered another record-breaking quarter, after sales jumped 23% year-on-year to $349 million for the three months ended March 31.

Although that only represented a 1% sequential increase, sales of the company’s lighting products are growing fast. They were up 6% sequentially and more than 50% over last year’s figure, reaching $130.7 million.

With the company predicting top-line revenue growth of between 5% and 10% in the current quarter, Cree’s stock continued its recent rise. Shares in the company are now trading at close to $58, meaning that the North Carolina headquartered firm has a market capitalization of approximately $6.7 billion.

Cree had hit the mainstream news headlines in the US last month with the release of its $10 direct LED replacement for 40 W incandescent bulbs (pictured), which it is selling through the Home Depot chain of stores.

Although the product will only make up a tiny proportion of Cree’s overall sales, CEO Chuck Swoboda told investors that it was “the biggest new product announcement for Cree and the lighting industry in the last few quarters and probably, the last several years”.

National media campaign
The high-profile launch, now featuring in a media campaign across the US, is designed to raise the profile of both LED lighting in general and the Cree brand, in a sector where Philips, Osram and GE are arguably the only widely recognized household names.

Swoboda said that the launch was a largely strategic one, with the bulb priced to give people a reason to switch to LEDs. Since the early-March launch, Osram has indicated that it will release a similar product for €10 in Europe – a response that the Cree CEO sees as healthy for the industry.

“We believe this product will also motivate the rest of the lighting industry to accelerate their efforts to bring new, cost-effective, high-performing LED-based products to the market," he told an investor conference call.

“While the bulb itself represents a small piece of our financial results, strategically, it is an important element of driving LED adoption and building the Cree brand to drive sales for the rest of the company.”

At $10, Cree’s LED bulbs are clearly still being sold at a significant premium to conventional incandescent and compact fluorescent varieties, but until recently the typical price for high-quality LED bulbs was at least double that - although subsidies for the technology in some parts of the US may have skewed prices somewhat. 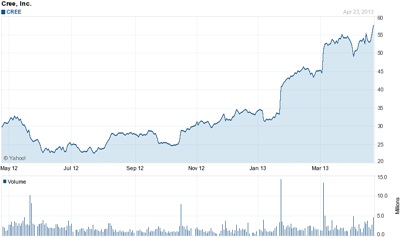 Responding to analyst questions, Swoboda observed: “As long as people were promoting LED bulbs for $20 or $30, this category wasn't going to move. You can already see the momentum shifting.”

The record sales helped Cree to more than double its net income on a year-over-year basis to $22.2 million.

The additional cash generated means that the company now boasts cash and equivalents of close to $940 million on its balance sheet - ensuring that it has plenty of scope to spend heavily on its media campaign and, perhaps, another major acquisition.