PV module market to bounce back to growth in 2014

But Solarbuzz predicts 20% decline in revenues this year, and survival remains the priority. 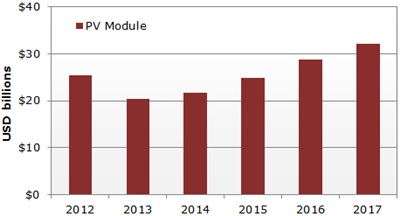 Solar roller-coaster: down then up

The global market for photovoltaic modules will continue to contract sharply this year, but begin an extended period of growth from 2014 onwards, according to a new report.

Analysts at NPD Solarbuzz predict that the ongoing glut of modules will depress the market by 20% to $20.5 billion in 2013, down from $25.5 billion last year.

Despite an upturn next year, revenues will still be below 2012 levels, but should expand to reach $32 billion by 2017, the report claims.

“Confidence in the solar PV industry was severely damaged in 2012, as module average selling prices (ASPs) declined approximately 50% year-over-year,” states Solarbuzz, adding that the end-market demand grew only 5% in 2012, a much slower rate of growth than had been seen over the prior three years.

The mismatch between that reality and earlier expectations placed severe price pressure on the sector, whose expansion in the prior two years was based on the theory that a supply of some 45 GW would have been required in 2012. The actual figure was only 29 GW, and the 45 GW level will only be approached in 2015.

According to Solarbuzz senior analyst Michael Barker, despite the dramatic shake-out that has seen several large players exit the market, the overcapacity problem will continue to have an impact through 2013.

“Share values of several publicly listed PV companies have been falling close to delisting levels, operating losses have been reported in the hundreds of millions of dollars per quarter, and many manufacturers are continuing to file for insolvency,” he observed.

Darwinian economics
For those who have sufficient cash reserves to make it through the shake-out, Solarbuzz predicts little respite, with consolidation set to continue through 2014. However, the Darwinian economics will at least provide opportunities for market share gains.

Barker believes that although the average price of PV modules will continue to decline, it will at least be at a slower rate than in the last two years. That will provide an opportunity for the leading module suppliers to implement cost reduction steps and create a profitable environment in advance of a significant rebound - Solarbuzz reckons that end-market demand will approach 46 GW in 2015.

“Surviving the downturn phase of 2013 and 2014 remains the key objective for all solar PV manufacturers,” the analyst noted. “Module suppliers with profitable business models will emerge as market leaders. In 2015, they can expect an industry that offers strong growth and revenue potential, which should restore confidence in the PV manufacturing sector and lead to further investments in new capacity and next-generation technologies.”

To be truly Darwinian, the PV sector should see the most adaptable companies survive and come to the fore, and there were clear signs of the adaptation strategy of industry leader First Solar earlier this month.

Mass production of the bifacial cells developed by start-up TetraSun is slated to begin in mid-2014, with rooftop installations in Japan likely to be the first target market.