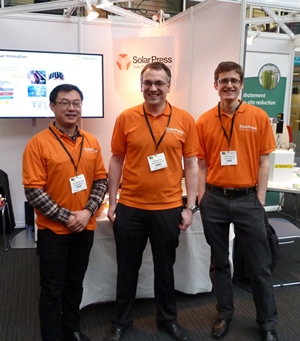 Organic photovoltaics (OPV) start-up Solar Press has signed a deal with the coating and printing equipment company Kroenert to develop and sell OPV modules. They say that the move, believed to be the first of its kind, will enable low-cost production of lightweight, flexible solar cells.

London-based Solar Press says that the agreement will help to reduce the barrier to entry for OPV, a technology that has thus far been hampered by difficulties in scaling the production of materials and high costs.

Under the partnership agreement, Solar Press will develop and optimize its production process and ink formulations to enable the manufacture of commercial OPV modules using Kroenert’s production coating and printing equipment.

Hamburg-headquartered Kroenert, which has expertise in coatings and lamination technology going back more than a century, will optimize its hardware to make the most of Solar Press’s OPV process.

Frank Schaefer, sales director for new products at Kroenert, added: “Solar Press have impressed us with their vision and the progress they have made towards delivering a commercially viable OPV production process and ink formulations. In partnership with Solar Press we can offer a turn-key OPV production solution that minimizes the investment required by customers wishing to manufacture OPV modules and products.”

Tough times
Though full of promise, developers of OPV technology have had a difficult time of late as the costs of conventional crystalline silicon photovoltaics have crashed.

Impressive recent technical work includes Heliatek’s development of a 12%-efficient organic cell and pilot-scale production, but the German company is still searching for a €60 million injection of capital funding to scale up its process to full production in the future.

Rival OPV developer Konarka was forced to file for bankruptcy in June last year after it failed to secure the additional funding required to step up its own manufacturing, and some market analysts are skeptical that OPV will be able to carve out any significant niche within the wider solar market this side of 2020.

Similarly, the Cardiff, UK, firm G24 Innovations, which specialized in dye-sensitized solar cells, went into administration last December, although it has since re-emerged under the guise of “G24i Power”, thanks to private investment made by US entrepreneurs and the Isle of Man-based company Innovation Management.

The UK has turned out to be something of a hot-bed for OPV development, with other start-ups trying to crack the market including Oxford Photovoltaics and the Cambridge University spin-out Eight19.

As yet, none has managed to transition from small-scale development and into scalable production - but through its new manufacturing agreement with Kroenert, Solar Press will be hoping to become the first.