The Directed Energy Systems conference has continued to build and expand.

The tenth annual Directed Energy Systems conference, organized by Defence IQ and held in London earlier this month, heard almost two dozen presentations on all of the key areas in the development of DES.

Defence IQ said of this year’s event, “Directed Energy Systems has continued to build and expand upon the key issue of moving DE technology out from the laboratory and into the field, for both lethal and non-lethal systems.”

Speakers came from a wide range of academic, strategic, military and technological sectors. One of the notable academic presentations focused on the growing importance of fiber lasers for DES by Prof. Andy Clarkson from the Optoelectronics Research Centre at the University of Southampton, UK, who was presenting on behalf of an unavailable Prof. Sir David Payne.

Clarkson described fiber lasers as the "perfect building block" for directed energy systems – as they are electrically powered, efficient, modular, reliable with their civilian technology backbone. He said, “Power levels for narrow-line width fiber MOPAs (master oscillator power amplifiers) are currently around a few kilowatts. With the development of new rare earth doped fibers, such as those with ytterbium and holmium, fiber lasers have the potential to scale to higher powers.”

He told the conference that even in relatively recent years fiber lasers had not been considered as suitable sources for directed energy systems because their outputs had not been great enough. However as kilowatt developments by the likes of IPG Photonics have led to fiber lasers starting to deliver multi-kilowatt outputs, these sources were creating a stir because of their ease of construction, economy and increasing power conversion efficiency. 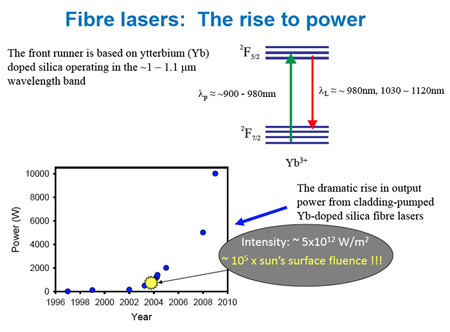 Fiber lasers based on Yb-doped silica based around 1µm have seen their powers rocket.

“In the past decade alone, cladding-pumped fiber lasers based on ytterbium-doped silica operating in the 1.0 to 1.1µm wavelength have seen their powers grow from a few watts towards 10kW and beyond, delivering energy intensities well above 5x1012 W/m2.

Such lasers have initially found many applications in materials processing including the fabrication of medical stents and the production of laser-treated turbine blades.

Clarkson acknowledged that there were several problems and power limitations around fiber lasers, especially in relation to scaling up their powers significantly beyond 10kW. “Their typical long and thin design gives the following problems: a high core intensity, which can cause damage, and leads to nonlinear limitations for pulsed applications, and a likely 30kW peak power limitation. Scaling to very high powers with narrow linewidth can be very challenging.” 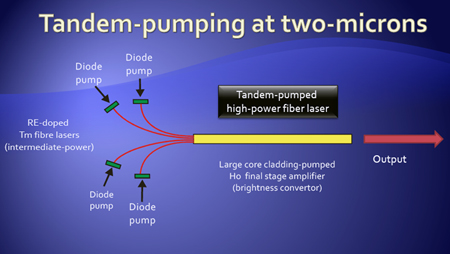 One strategy to boost fiber laser output is tandem pumping.

An alternative strategy is to use “slightly multimode” fibers or a technique called tandem pumping, in which multiple diode pumps feed into a large core cladding-pumped ytterbium final stage amplifier (brightness convertor), which is a route to 10kW output.

Looking to the future and addressing several questions from conference delegates about the potential for ever higher power fiber lasers, Clarkson concluded, “Further power scaling of ytterbium lasers is likely to be challenging as we approach the fundamental limits of that technology and design. However, 2µm fiber lasers based on thulium and holmium look very promising as they offer further power scaling potential and operation in the ‘eyesafe’ wavelength regime.”

Optics.org attended the two-day DES 2013 conference and over the coming weeks will be publishing further reports based on selected conference presentations and interviews.