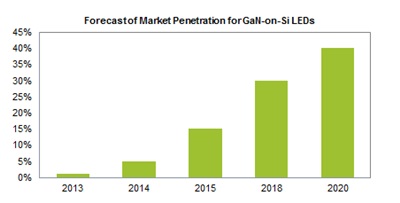 In a dramatic change from the status quo, nearly half of all gallium nitride (GaN) LEDs will be produced on silicon substrates by the end of the decade.

That’s according to a new report by analysts at IHS, who forecast that the penetration of gallium nitride-on-silicon (GaN-on-Si) wafers into the LED market will grow at a remarkable compound annual growth rate (CAGR) of 69 percent from now until 2020.

If correct, it would mean that some 40 percent of all GaN LEDs were being manufactured on silicon. In comparison, 95 percent of them were fabricated on sapphire wafers this year, and only 1 percent on silicon.

Silicon has always been seen as a way to cut the cost of LED production and therefore solid-state lighting, but overcoming the physical problems resulting from the lattice mismatch between the GaN-based light-emitting layers and the silicon substrate has remained a technical challenge thus far.

Report author Dkins Cho believes that some major manufacturers, particularly in Asia, have now demonstrated sufficient progress to overcome those challenges and predicts a sea-change in the way that the chips are made.

“Manufacturing large ingots made from sapphire is difficult, whereas silicon wafers are available from 8 inches up to 12 inches and are generally cheaper and more abundant,” said Cho. “There is a large pre-existing industry for silicon-based manufacturing that is leveraged to create economies of scale and reduce the cost of an LED.”

CMOS conversion
Companies that previously manufactured silicon semiconductors already own legacy 8-inch CMOS processing units that can be converted for LED production with a small modification, he says. These companies already have in-house expertise and technology associated with silicon-based processes.

“Many of the CMOS semiconductor manufacturers already have excellent inspection tools, unlike traditional LED companies,” Cho added. “This could help increase their process yield through in-situ monitoring. However, it is unlikely the repurposing will happen overnight; instead we forecast a shift during the coming years.”

While virtually all of the major LED manufacturers have worked on the silicon option, none are yet producing such chips in significant volumes. But some emerging competitors, for example UK-based Plessey Semiconductors, are in the early stages of ramping production of GaN-on-silicon devices.

Different outlook
However, not everybody agrees with the IHS outlook. Earlier this year, Lux Research analysts said that GaN-on-silicon would account for less than 10 per cent of all LED wafers* produced by 2020 – reasoning that the physical lattice mismatch between the two materials would remain problematic while advances in sapphire production and new deposition technologies would instead be used to reduced LED chip costs.

Cho says: “Every hetero deposition [method] has the challenge in the mismatch of lattice and thermal layers but there have been great improvements by a few leading companies to overcome these challenges [with silicon]. The majority of companies are still trying to enhancing their yield rate. We forecast the growth of GaN-Si market share will be achieved with only a few participants.”

“[Our] GaN-on-silicon market share forecast is based on the actual LED companies’ capacities and their expansion plans. We believe Asian LED companies rather than the US and European LED manufacturers will be the key growth leaders.”

Cho believes that television and monitor backlights and some LED lighting formats (mainly for small and medium power units) will be the key applications that switch to silicon substrates - because those applications with a huge demand and a simplified binning requirements would be attractive for GaN-Si LED suppliers.

“We expect both silicon and sapphire to co-exist for many years, but the sapphire market share to continue to lose against silicon and to represent a minor [share] in the end,” Cho concluded.

The IHS report is available now from the company’s web site.

* article updated (December 16) to clarify that the Lux Research report quoted here refers to LED wafers, rather than LED chips.