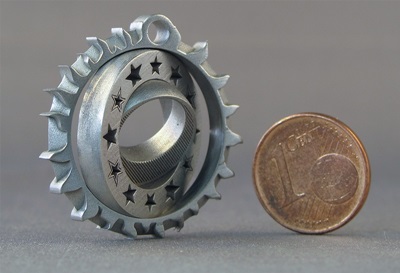 The venture, called 3D MicroPrint GmbH, follows seven years of collaborative technology development between the two companies that culminated in the installation of a first system at a German research institute earlier this year.

His counterpart at 3D-Micromac, Tino Petsch, added: “Our timing is virtually perfect. The current 3D printing hype shows that our investment in the development of micro laser sintering systems was exactly right. Together we now offer a trend-setting solution that opens up new approaches in product development and manufacturing for our customers.”

Saxony headquarters
Based in Chemnitz, near Leipzig in the German region of Saxony, 3D MicroPrint has already moved into its premises on the Chemnitz Smart Systems Campus, where it will be headed up by Petsch and Joachim Göbner, formerly in charge of micro laser sintering at EOS.

The micro laser sintering technique is a form of additive manufacturing technology, and uses a laser to build up small parts from metal powders, layer by layer, from 3D design data.

As with other additive manufacturing, or 3D printing, technologies, using it means that even a production run comprising a single part can be manufactured at a reasonable cost, enabling mass customization of similar products.

Target applications for the new venture include nozzles for the automotive industry, components for medical devices, personalized jewelry, mold-making and aerospace technology.

Founded back in 1989, EOS (the company’s name is short for “electro-optical systems”) has emerged as one of the key providers of the equipment behind what many expect to deliver a revolution in manufacturing. Last week, the Frankfurt-based firm said that it was in the process of transforming itself from a provider of systems for prototyping to one supplying them for industrial series production.

For the financial year that ended in September 2013, EOS increased turnover to €130 million. It has also taken on 70 new employees in that time, and is building a new 17,000 square meter customer and technology center that should open for operations in May next year.