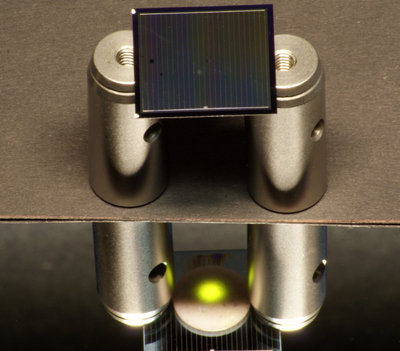 A two-sided silicon solar cell illuminated by an infrared laser.

Typically, solar cells will only absorb only a small portion of the solar radiation spectrum: approximately 20% of the sun's energy is unavailable to silicon cells because they are unable to utilize short-wavelength IR radiation for generating power.

Now researchers of the Fraunhofer Institute for Solar Energy Systems ISE in Freiburg, Germany, together with their colleagues at the University of Bern, Switzerland, and Heriot-Watt University in Edinburgh, Scotland, have for the first time made a portion of this radiation usable with the assistance of up-conversion. The technology that transforms infrared into usable light has been known about since the 1960s.

Stefan Fischer, a scientist at ISE comments, “We have been able to adapt both the solar cells and the up-converter to obtain the biggest improvement in efficiency so far.” The potential of this work is significant: conventional silicon solar cells theoretically convert about 30% of sunlight falling upon them into electrical power. Up-converters could increase this portion to around 40%, say the developers.

As sunlight falls on conventional solar cells, they absorb the visible and near-infrared light. Usually the infrared portion is not absorbed, because it passes right through them. But on the backside of the cell, the radiation hits the up-converter, which essentially is a microcrystalline powder made of sodium yttrium fluoride embedded in a polymer.

An erbium ion that has been excited in this manner can then “jump down” from the highest energy state. In doing so, it emits light with an energy equal to all of the light particles that have helped the electron to climb on up. The up-converter collects the energy of several such particles and transfers it to a single one. This has so much energy then that the solar cells “see” it and can utilize it.

The researchers needed to adapt the solar cells to be able to employ an up-converter in this way. Normally, a metal is vapor-deposited on the backside, enabling current to flow out of the solar cells – so no light can shine through normally. “We equipped the solar cells with metal lattices on the front and rear sides so that IR light can pass through the solar cells. In addition, the light can be used by both faces of the cell – we call this a bi-facial solar cell,” explains Fischer.

Scientists have applied specialized anti-reflection coatings to the front and rear sides of the solar cell. These cancel reflections at the surfaces and assure that the cells absorb as much light as possible.

Fischer explained, “This is the first time we have adapted the anti-reflection coating to the backside of the solar cell as well. This could increase the efficiency of the modules and raise their energy yields. The first companies are already trying to accomplish this by implementing bi-facial solar cells."