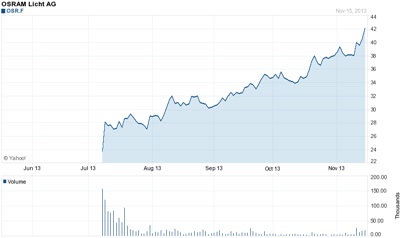 On the up and up: Osram's stock price

Lighting giant Osram has reported a net income of €34 million for its first fiscal year as a separate entity from former parent company Siemens.

That represented a substantial swing from a net loss of some €391 million in fiscal 2012 – and reflected growing sales of LED-based solid-state lighting products and the early benefits of major cuts to its workforce.

But one location where Osram continues to add jobs is at its giant LED wafer and chip manufacturing in Regensburg, Germany. The Osram Opto Semiconductors division – of which the Regensburg facility is a key element – posted revenues exceeding €1 billion for the first time in the latest fiscal year, up 14 per cent on the prior year and indicating the strength of the transition to solid-state technologies in lighting.

During the 12 months ended September 2013, 29 per cent of Osram’s €5.3 billion total sales (equivalent to €1.54 billion) related to LED-based products. That compared with €1.35 billion in fiscal 2012, while the proportion in the latest financial quarter had risen to 31 per cent. By 2017, the company expects that more than half of its sales will relate to LEDs.

Culture of entrepreneurship
The bulk of Osram’s restructuring revolves around the management of that transition. It involves the closure of some eleven plants around the world where older lighting technologies are manufactured, whereas the key locations for LED production are in Regensburg, Penang in Malaysia and Wuxi, China, where the firm is increasing capacity with a second back-end fab due to open within six months. 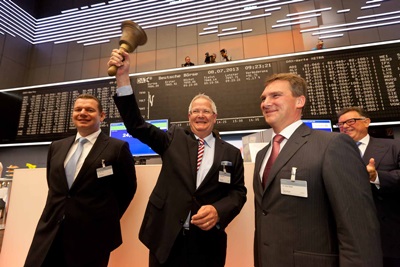 CEO Wolfgang Dehen, who told an investor conference call that the separation from Siemens had given Osram more entrepreneurial freedom and the ability to make faster decisions, said:

“We have made significant progress in our company reorganization and execution continues to be ahead of schedule.”

As a result of that, Osram is also ahead of its operational savings target – something that appears to have impressed the market ever since Siemens raised €7 billion through its July 2013 flotation of the lighting firm.

Since that listing on the Frankfurt and Munich exchanges, Osram’s stock price has nearly doubled in value from its launch price of €24. Following the positive fiscal 2013 report, expectations of a shareholder dividend in the current fiscal year and an upgrade from analysts at Berenberg, on November 18 Osram’s stock was trading at just over €44. 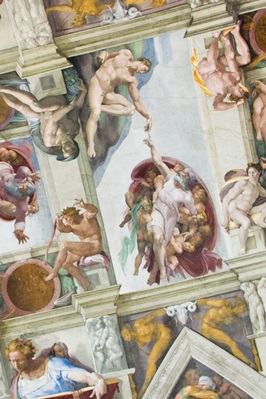 Sistine Chapel retrofit
Meanwhile CTO Peter Laier stressed to investors that it was crucial to keep developing LED technology and held out some hope that Osram’s Augsburg facility in Germany could benefit as production of retrofit LED lamps increases. “We want to produce in the region, for the region,” he said.

Laier added that the market response to Osram’s sub-€10 LED replacements for 40 W and 60 W incandescent lamps has been strong. In contrast to traditional bulbs that highlight the power consumption of the product, the packaging of those retrofit products prioritizes their lumen output – a change in emphasis that the CTO is very keen to see more of.

He believes that just as consumers have in recent years grown accustomed to knowing the number of megapixels in their camera sensor, or the data rate of their wireless connection, in the future they ought to equate lamp brightness with lumen output rather than power consumption.

One high-profile retrofit project that is currently in progress is Michaelangelo’s Sistine Chapel in the Vatican City, Rome. From next year, no fewer than 7000 LEDs will be used to illuminate the seminal artwork on the ceiling of the chapel, delivering a customized spectrum designed to highlight the pigments used in Michaelangelo’s 500-year-old paint.

The project, paid for partly with European subsidies, is also expected to reduce the Sistine Chapel’s lighting power consumption by around 60 per cent in the process.