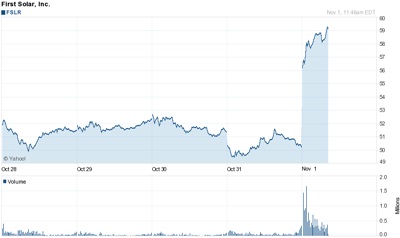 Back on the up: First Solar's stock price

First Solar, the world’s largest producer of thin-film solar panels, has soared in value after what its CEO Jim Hughes described as a quarter full of “remarkable achievements”.

Those achievements included a sharp increase in revenue and profit thanks to the sale of some large solar projects in recent weeks, as well as 860 MW of new business booked and progress towards the deployment of more efficient solar modules.

First Solar reported a net profit of $195 million on sales of $1.27 billion – figures that were up 51 per cent and 122 per cent on the same quarter last year, respectively.

Hughes highlighted that the cost-per-watt of First Solar’s panels fell to a new low during the quarter. At $0.59 per watt, including freight warranties and recycling costs, the effective cost of the power produced by company’s modules fell by $0.08 in just a single quarter – the fastest rate of reduction since 2007.

That figure is also set to drop further, with Hughes saying that First Solar was on track with its module efficiency improvement program. A year ago, the company said that it had begun rolling out a new laser scribing process as one of the first steps in the efficiency drive.

Efficiency ramp
In the latest quarter, the average conversion efficiency of produced modules was 13.3 per cent - up from 12.6 per cent a year ago - while factory utilization was 80 per cent.

Both of those figures can be expected to increase in the future, with the company currently testing modules showing an efficiency of 14.1 per cent. All other things being equal, full production of those modules across the company's various manufacturing sites would deliver a total cost-per-watt approaching $0.50.

Hughes told investors that the efficiency ramp meant that the performance gap between First Solar’s CdTe panels and the crystalline silicon technology made by its largely Chinese rivals had been “virtually eliminated”, and that the CdTe panels would surpass c-Si by the middle of next year.

Sharp falls in the cost of c-Si panels since 2011 have been largely generated by a huge oversupply of the products – something that has stabilized more recently as several suppliers have gone bankrupt or exited the business.

But Hughes also warned that recent announcements of another expansion in c-Si manufacturing capacity in response to demand in China and Japan were “of particular concern”, as they could lead to a renewed period of oversupply and inevitable price pressure.

• In early trading on November 1, First Solar’s stock was up 17 per cent at $58.70 – equivalent to a market capitalization of $5.73 billion. And while the stock remains well below the dizzy heights of 2008, it has now more than quadrupled in value from its low point in mid-2012.