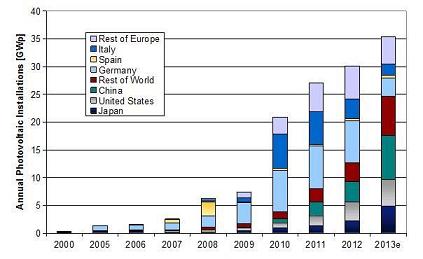 Global production of photovoltaic (PV) cells grew by 10% in 2012 in comparison to 2011 - and that was despite a 9% decline in solar energy investments, according to the annual PV Status Report released by the European Commission's Joint Research Centre.

Europe remains the leader in the sector of "newly-installed capacities", accounting for 51.7% (16.8GW) of the 30GW installed worldwide.

The report states that abundant solar resources in combination with zero emissions from solar installations have attributed to PV energy systems a key role in the transition to a low carbon energy supply. This potential has driven development of more efficient PV modules and transformed the sector into one of the fastest growing industries.

Production of PV cells and modules has gone from 46 MW in 1990 to 38.5GW in 2012. Statistically documented cumulative installations worldwide accounted for almost 100GW in 2012 - placing the EU in the lead position with its market share of over 69GW.

Within the EU, Germany has kept its leading position in PV installation with an additional 7.6GW in 2012, while Italy's newly-installed 3.5GW have allowed it to reach an electricity production covering 7.3% of the total electricity demand during the first seven months of 2013.

A steep 80% drop in solar module prices between 2008 and 2012, triggered by an overcapacity of production, created serious financial problems for manufacturers, but ultimately led to a consolidation of the industry and fuelled extensive growth of the PV market in Asia: by 60% in 2012 and a projected to be another 100% in 2013. The rise in annual production has resulted in China and Taiwan together accounting for 70% of the global production.

The report optimistiaclly adds, "despite the on-going difficult economic conditions, the number of the new PV markets is actually increasing." This, along with rising energy prices and the pressure to stabilise the climate is expected to maintain high demand for solar power systems.

Electricity production from PV modules has already demonstrated that it can be cheaper than current conventional consumer electricity prices in many countries. In addition, renewable energies which are not fuel-dependent, are, in contrast to conventional energy sources, among the technologies that are offering the prospect of a reduction in energy prices, the report consludes.