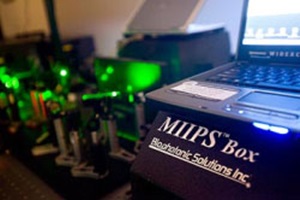 Michigan-based Biophotonic Solutions (BSI) has closed a $1 million round of series A funding, with the Michigan Angel Fund investing in its adaptive pulse compression technology.

The company’s automated approach for optimizing pulses, known as “multiphoton intrapulse interference phase scan” (MIIPS) technology, is seen as a way to help transfer ultrafast lasers out of the science laboratory and into medical and industrial applications.

To some degree, that is already happening, with femtosecond pulse lasers now being used in cataract treatment.

However, BSI says that the complexity of ultrafast lasers still makes them expensive, challenging to implement, and to demand manual tweaking from a laser expert to fine-tune their output.

“Thanks to this new level of autonomous laser output consistency and ease of use, MIIPS technology may ultimately enable scalable and cost-effective femtosecond laser deployment in a wide range of industrial and medical settings,” it claims.

Kiyomi Monro, who until earlier this year was the CEO at Mobius Photonics, said of BSI’s angel funding: "The Series A capital shores up BSI's resources so that we can aggressively pursue OEM business in microscopy, semiconductor processing, and the development of cost-effective ultrafast lasers with adaptive capabilities.”

He added: "We look forward to complementing our established business, which is enabling femtosecond laser breakthroughs at leading universities, with new commercial opportunities."

Photonics West live demo
The MIIPS approach allows the design of specific pulse shapes by suppressing nonlinear optical phenomena through destructive interference. BSI says that this is extremely important for applications such as multiphoton microscopy.

The company showcased its adaptive pulse compression technology with live demonstrations at the Photonics West trade show held in San Francisco in February this year, in the form of its “femtoAdaptiv” laser.

“Unlike laser systems on the market today that correct for linear chirp using static optics such as prisms mounted on mechanical actuators, the femtoAdaptiv automatically pre-compensates high order dispersion using adaptive optics,” it announced at the time.

The adaptive system controls the center output wavelength between 650 and 1050 nm and the pulse duration of between 5 and 500 femtoseconds in an instant, without the need for any moving parts.

BSI is aiming for the technology to be used in high-end optical imaging techniques like coherent anti-Stokes Raman spectroscopy (CARS), where it removes the need for a second laser, and to help generate brighter images in multiphoton imaging.

Founded a decade ago by original CEO Marcos Dantus as a spin-out from Michigan State University, BSI initially signed an exclusive licensing deal with Coherent back in 2005.

The laser giant held exclusive rights to manufacture and sell the MIIPS technology until 2009, at which point BSI switched from a licensing to a manufacturing business model.

Coherent has since taken a different approach in the ultrafast space, notably through the acquisitions of Lumera Laser, Innolight and Midaz Lasers to target commercial applications with picosecond sources.