Terahertz device produced by University of Sydney team could lead to new microscopes 'within two or three years'. 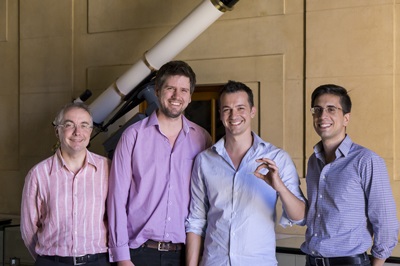 A research team in Australia says that a new type of lens based on metamaterials could open up an entirely new field of medical diagnostics within just three years.

Critically, the device is far smaller than any previous attempts at making metamaterial lenses, and was produced using the industrial method of fiber drawing – suggesting that it has a good chance of transitioning to commercial use.

The University of Sydney group, whose work has just been published in the journal Nature Communications, says that the lens, which operates in the terahertz spectral region, could be used for early cancer diagnosis or to monitor drug delivery to cells.

According to lead author Alessandro Tuniz and his colleagues at Sydney, the lens has ten times the resolution of any current equivalent, making it a potentially very powerful tool for biological sciences and medicine.

In a release accompanying the paper’s publication, Tuniz explained: “This advance means we can unlock previously inaccessible information on the structure of molecules, their chemical make-up and the presence of certain proteins.”

“This opens up an entirely new tool for biological studies,” he predicted. “It could allow earlier skin cancer diagnosis, because smaller melanomas can be recognized. For breast cancer, it can also be used to more accurately check that all traces of a tumor have been cut out during surgery.”

Industrial-style production
Based on a combination of metal and plastic materials, the lens operates in the terahertz region – situated between the far-infrared and microwave regions of the electromagnetic spectrum. That should enable physicians to see phenomena that until now have been invisible.

The lens was made using the well-known fiber-drawing method, and based on a stack of more than 450 tapered indium wires arranged hexagonally and surrounded by a polymer with a high terahertz transmission. 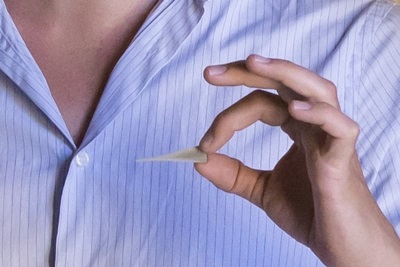 In focus: the Sydney team's lens

The stack of indium wires was then heated and drawn to produce a fiber containing a long, continuous array of metal microwires that can be chopped into a large number of smaller devices – indicating the method's scalability.

“The wire-based hyperlenses we demonstrate here are three orders of magnitude smaller than previous experiments in the microwave,” writes the team in its paper.

Manufacturing challenge
While metamaterials has become a key new area of photonics research, the difficulty of making technologically useful devices has, until now, restricted any potential industrial impact.

Boris Kuhlmey from the Sydney team commented: “We know of only two or three other cases worldwide, including for wireless internet and MRI applications, where metamaterials could also be put into practice in the next couple of years.”

He explains that a key challenge has been to make metamaterials on a useful scale. “This is one of the first times a metamaterial with a real-world application, quickly able to be realized, has been feasible,” Kuhlmey said.

“Within the next two to three years, new terahertz microscopes that are ten times more powerful than current ones will be possible using our metamaterial.”

Beating the optical diffraction limit
In their paper, the Sydney researchers describe their adoption of wire array metamaterials as the key to the breakthrough. Because of their extreme anisotropy, they are able to beat the conventional diffraction limit that typically restricts optical microscopy techniques to a resolution of half the wavelength of light being used to interrogate a specimen.

But until now they had only been demonstrated at microwave frequencies, and even then were restricted to extremely short propagation lengths that would not be clinically useful.

In the abstract of the paper, Tuniz and colleagues write: “We demonstrate imaging through straight and tapered wire arrays operating in the terahertz spectrum, with unprecedented propagation of near-field information over hundreds of wavelengths and focusing down to 1/28 of the wavelength with a net increase in power density.”

“Applications could include in vivo terahertz endoscopes with resolution compatible with imaging individual cells."

Although some existing techniques are already able to beat the optical diffraction limit, they are typically complex and expensive in nature, and their use has so far been restricted to central technology development laboratories rather than clinical application.

Tuniz also highlights the potential spectroscopic usefulness of terahertz technology beyond that of conventional X-ray imaging, saying: “The metamaterial lens would allow us not only to see through some opaque materials, but also to gather information on their chemical composition, and even information on interaction between certain molecules, without the danger of X-rays.”

That could result in the lens being used to analyze the delivery of drugs to individual cells, something that may prove revolutionary in future medical research.