Sales, profits up sharply at Cree

CEO of the LED maker hails impact of its consumer light bulbs, launched less than a year ago. 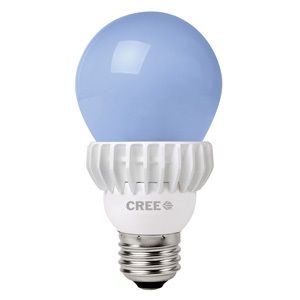 Cree, the LED chip maker and solid-state lighting company, has posted a sharp increase in both sales and profits in its latest fiscal quarter.

For the three months that ended September 29, the North Carolina firm delivered net income of $30.5 million on sales of $391 million. Those figures represented rises of 24 per cent and 89 per cent compared with the same period last year, respectively.

Much of that growth relates to surging sales of LED lighting products, which jumped to $148 million in the latest period – thanks partly to the success of Cree’s consumer-targeted LED light bulbs designed as replacements for old, inefficient incandescents.

Sold through the Home Depot stores in the US, those bulbs are proving to be a hit. So much so that earlier this month Cree’s LED bulbs won the Home Depot 2013 Innovation Award. "Cree introduced a game-changing series of LED bulbs at a retail price point that gives consumers a reason to switch to LED lighting," commented the retailer.

Building the brand
“One year ago, the Cree LED bulb was still a research and development idea, and Cree had never sold a branded consumer product,” noted Swoboda. “Today, we are setting the standard for consumer LED bulbs.”

“Working together with The Home Depot, we have changed the lighting category and changed consumer perceptions about LED bulbs.”

“LED bulbs should work better and cost less to own, delivering a no compromise solution. That is why the Cree LED bulb has been so successful. It looks like a regular lightbulb, it works as good or better than a regular bulb and it pays for itself.”

While some commentators have expressed concern that companies like Cree may suffer squeezed profit margins in a market as competitive as that for consumer light bulbs, Swoboda responded:

“The Cree LED bulb is not a low-margin product strategy. It is a high-margin brand strategy. The success of this product category for Cree is more than sales growth and incremental profit contribution. It is also the tremendous long-term benefit of building the Cree brand.”

Full factory
Swoboda indicated that although Cree’s factories were virtually full, additional capacity set to come online in the current quarter would ensure that it could continue to meet both external customer demand for its chips, as well as internal demand relating to its various LED lighting products.

With the company’s bulbs recently being awarded “Energy Star” qualification by the US Department of Energy, thus qualifying them for significant rebates, internal demand is set to grow sharply in coming months.

In order to meet that demand, Cree’s capacity expansion partly depends on its migration to LED manufacturing on 6-inch, rather than 4-inch, wafers. However, the company is also sourcing LEDs from third-party suppliers to meet overall demand for its products.

While the commercial sector represents around three-quarters of the overall lighting market, Swoboda believes that Cree’s recent focus on consumer lighting will pay dividends in the future as it helps to raise overall awareness of the benefits of LED lighting, as well as the Cree brand that is up against big hitters in the form of Philips, GE and Osram.

“The bulb is a means not only to sell to consumers but also to build a brand,” the CEO told an investor conference call. “And what we've found is that we've been able to engage a much broader part of the population into a conversation about LED lighting, and getting people to think about why [they] still use that old energy-wasting, frankly money-wasting, technology.”

Despite the solid results, concerns over margins and the short-term sales outlook appeared to worry investors and Cree’s stock price fell 15 per cent in after-hours trading following the company’s announcement. 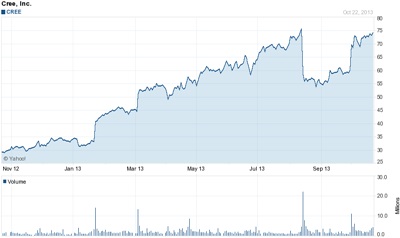 Its managers predicted that sales would increase around 5 per cent sequentially in the closing quarter of the calendar year – less than has been seen in previous years – and that net income would remain flat at around $30 million.

But even after that latest pull-back, Cree’s stock has still doubled in value over the past year – sending its market capitalization close to the $9 billion mark.