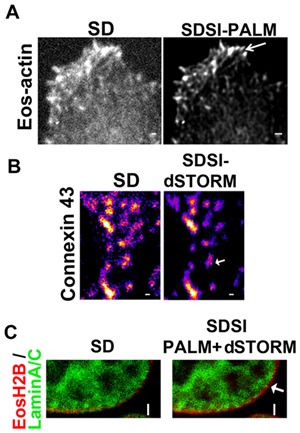 Scientists at London’s Queen Mary University have devised a new approach to optical microscopy that yields super-resolution images well beyond the limit described by Abbe’s law.

Though not the first technique to do so, the “spinning-disk” microscope described by Neveen Hosny, Ann Wheeler and colleagues in the journal PLOS ONE generated good signal-to-noise imagery in any selected axial plane within a cell, and used a relatively low laser power compared with existing super-resolution techniques.

And unlike those existing microscopy techniques that can only generate such detailed imagery at the bottom of a cell, the Queen Mary approach is able to image any part of a cell with a resolution of 80 nm, including the all-important nucleus. Optimizing the image analysis algorithm used brought that figure closer to 30 nm.

The team concludes in its paper that the new approach “presents an encouraging step forward for the wider application of super-resolution methodologies for the biological researcher”.

So whereas techniques such as photoactivation light-microscopy (PALM) or stochastic optical reconstruction microscopy (STORM) are currently restricted to deployment in biological science laboratories, spinning-disk super-resolution imaging (SDSI) could be applied in live cell imaging, so-called “high-content” screening and three-dimensional imaging.

“Our method uses low laser power and fluorescent probes which are available either commercially or through the scientific community, and therefore it is gentle enough for biological imaging,” reported the academic team.

Four-laser setup
The optical setup for SDSI is a relatively simple one. It is based around an inverted Nikon microscope, four solid-state lasers from Coherent set to power levels of 100 mW or lower, and a spinning-disk unit from Yokogawa Nipkow.

Wheeler, the head of imaging at Queen Mary’s Blizard Institute, explains the microscope operation as follows:

“The spinning disk microscope produces focused images at high speed because it has a disk with an array of tiny holes in it which remove the out-of-focus light. We have combined this microscope with new fluorescent probes, which switch between a bright and dark state rapidly. This system is now allowing us to see structures three times smaller than could usually be seen using standard light microscopes.”

She continued: “We have been able to visualise chromatin, which is the protein structure that controls DNA expression and the nuclear envelope. We have also used the method to get images of focal adhesions – sub-cellular macromolecules which the cell uses to attach to its environment.”

Although it was previously possible to see such structures, the new method would provide cell biologists with a greater degree of detail, allowing them to look at protein complexes in the nucleus smaller than 200 nm – something that has not been done before.

Wide field of applications
One drawback with the technique could be its sensitivity to vibrations – the Queen Mary team housed the spinning-disk microscope in a controlled environment designed to minimize any disturbances.

Despite that, Martin Knight, a professor at Queen Mary’s School of Engineering and Materials Science and one of the paper’s authors, predicted a wide field of application:

“Super resolution microscopy is a major step forward and we are looking forward to using this technology in a wide range of applications from stem cell behavior to understanding arthritis or the development of nanomedicine.”

According to the university, Wheeler has worked to ensure that the technique is cost-effective and suitable for operation by scientists who are not experts in optics. She added that future developments would see improved fluorescent probes and application of SDSI to image the cellular processes at work in cancer.