Lithography firm expecting to post EUV tool sales of around €700 million this year. 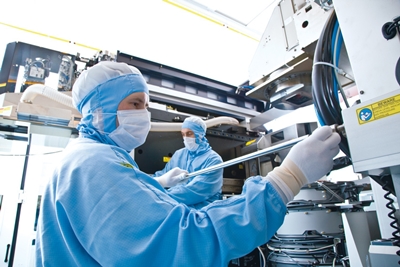 ASML closed out its fiscal 2012 with annual sales of €4.7 billion – in line with expectations but down from the record-breaking 2011 figure of €5.7 billion.

“2012 fourth-quarter and full year sales and profit came in as expected, making the year our second best ever,” reported Eric Meurice, CEO at the market-leading lithography firm, in its full-year results.

That prediction is based on an expected transition to more lithography-intensive 14-20 nm foundry and logic nodes as 2013 unfolds, driven by the requirements of next-generation portable devices. “All semiconductor architecture leaders have designs pending and need initial capacity,” said Meurice.

But market demand for deep-UV lithography systems remains subdued among memory chip manufacturers, although ASML’s CFO Peter Wennink told an investor conference call that there could be an upturn in the NAND sector towards the end of the year.

EUV tool shipments
In addition, ASML now says that it will ship its first NXE:3300B extreme ultraviolet (EUV) tool in Q2, with “a maximum” eleven potential shipments of EUV tools in 2013 overall. That would amount to net sales of around €700 million.

“We are encouraged by the latest EUV development performance as we have now demonstrated a stable 40 W of EUV source power against a production target of 105 W,” said CEO Meurice, adding that the source design had now been tested successfully at up to 60 W for debris mitigation and had shown no signs of performance degradation.

ASML’s NXE:3100 pre-production EUV lithography systems have now exposed a cumulative total of more than 30,000 wafers at customer sites, and with recipe development for the sub-14 nm Logic and 22 nm DRAM nodes ongoing, the company is hopeful that it may receive further orders for production systems for delivery in 2014.

At present, ASML is negotiating with four customers on the potential shipment of between eight and twelve EUV tools during 2014. Meurice told investors that according to ASML’s internal model, production EUV tool shipments should then rise to between 30 and 36 units in 2015, and more than 60 in 2016 and 2017 as the technology becomes more widely accepted.

The first of the production NXE:3300B customer systems is now said to be in the final stage of test and qualification in ASML’s cleanroom at its Veldhoven headquarters in The Netherlands.

Engineering problem
Developing a sufficiently powerful EUV light source for high-volume manufacturing remains the main challenge facing ASML and it light-source suppliers. The 40 W achieved with good dose control over an extended period of time – critical for use in production fabs – is lower than previously envisaged but high enough to allow initial shipments of the NXE:3300B to be prepared.

ASML plans to implement sufficient improvements to EUV power levels over time so that its customers can produce 70 wafers per hour with the tools by mid-2014. But in ASML’s investor call to discuss the 2012 results and outlook, Meurice admitted that the company had missed performance targets for the EUV light source last year.

To support the transition to EUV, ASML is also preparing to acquire key light source supplier Cymer. Although approval from several regulatory authorities, as well as the Cymer shareholders, is still required – something that will go to a vote at Cymer’s extraordinary meeting on February 5 – ASML says that clearance for the deal has been granted by the US Committee on Foreign Investment in the United States (CFIUS) and Germany’s anti-trust authorities. “We continue to expect the transaction to close in the first half of 2013,” said the firm.

Investors reacted positively to ASML’s outlook, with the company’s stock value rising by around 5% following the full-year update.