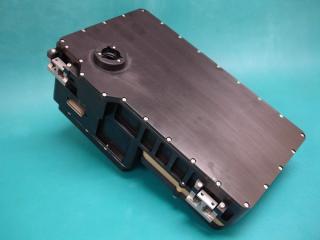 Northrop Grumman has announced a new version of its All Semiconductor Airborne Laser Threat Terminator (ASALTT) platform, a family of infrared countermeasures systems intended to protect military aircraft from attack.

The new variant includes a high-brightness and high-power quantum cascade laser (QCL) module developed in collaboration with California-based QCL specialist Pranalytica, and tailored to meet the requirements of the new design.

According to Northrop Grumman, the QCL module will deliver 10 watts of power in the mid-wave infrared (MWIR) spectrum while still meeting the beam-quality requirements imposed by countermeasures applications. The ability to maintain real-time color ratio control was specifically mentioned as being an advantageous feature of the new system.

"It is through talent, innovation and a strategic relationship that we are able to produce a 10-watt MWIR module, packaged to the size of a smartphone," said Gordon Stewart general manager of Northrop Grumman's Laser Systems business unit.

ASALTT currently sits at Technology Readiness Level 6 (TRL-6) in the US Department of Defense TRL scale, which has nine levels in all. TRL-6 represents a successful system or subsystem model, or a prototype demonstration in a relevant environment, and ASALTT reached that level in April 2012.

Higher powers
Countermeasures applications have been an attractive use for QCL sources for some time, but improvements in power output, reliability and power consumption have been desirable.

The mid-IR radiation produced by QCLs can distract heat-seeking missiles from their targets, and the sources can operate at so-called "out-of-band" wavelengths without alerting an adversary, unlike sources operating at shorter infrared wavelengths.

Proof of the appeal came in July 2011, when Nortrop Grumman invested in QCL-developer Daylight Solutions, and took a non-controlling stake in the company.

The technical challenges associated with effective use of QCLs in countermeasures systems have included the need to efficiently combine a number of beams into a single output, to produce a beam of greater overall power or one that can contain multiple wavelengths. Daylight Solutions was awarded a patent relating to this topic in December 2012, an indication of its continuing significance to QCL developers.

Northrop Grumman's ASALTT is also known to employ an architecture which combines and co-aligns QCL sources into a single laser output.

"Through collaboration, we have met both double-digit power specifications and the high beam quality sought for next-generation laser systems that satisfy size, weight and power requirements," commented Kumar Patel, CEO of Pranalytica. "Previously these specifications could not be met."

Kumar Patel has a storied history in the laser industry, being the named inventor of the carbon dioxide, carbon monoxide, and the spin-flip Raman lasers, and a pioneer of applying them in trace analysis. Pranalytica was founded in 2000, developing its initial QCL modules under the Efficient Mid-Infrared Laser (EMIL) program from DARPA.

Dr Patel describing development of the CO2 laser and the work of Pranalytica, as part of the SPIE Advancing the Laser series: