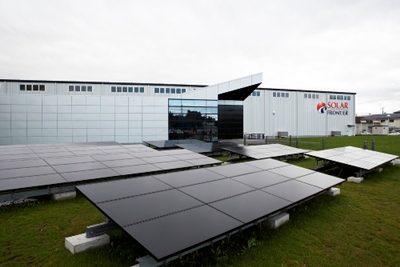 Measured by the National Institute of Advanced Industrial Science and Technology (AIST), the 19.7% copper indium selenide (CIS) cells raise the bar from the previous best of 18.6%, a figure that was set ten years ago.

And although the cells are much smaller than what would be required for useful commercial applications – they measured only 0.5 cm2 in area – Solar Frontier says that because the cells were cut from a production-size 30 cm x 30 cm substrate, they have good potential for commercial development.

Sputtering>co-evaporation
In addition, the company employed the same process of sputtering followed by selenization that it already uses to mass-produce commercial cells. Solar Frontier says that it chose this method over the alternative co-evaporation process because it offers greater efficiencies in mass production. Its researchers are now aiming to beat the current overall thin-film world record of 20.3% efficiency that was set with the co-evaporation method.

“The CIS thin-film modules currently available from Solar Frontier have gained a reputation for high performance in actual power generation, as they are not easily affected by shadows or high temperatures. Now, even higher real-world performance can be expected by applying this new basic technology. We will continue working to further enhance our technological capabilities with the aim of setting a world record for thin-film solar cells overall.”

Solar Frontier has been making CIS modules at its Kunitomi Plant since February 2011, and says it has steadily increased its production efficiency over the following two years. “Currently, the CIS thin-film solar modules produced at Kunitomi have a conversion efficiency that exceeds 13%, and the amount of electricity generated (kWh) per installed capacity (kW) exceeds that of other solar modules,” it claims.

“Showa Shell Sekiyu and Solar Frontier intend to contribute even further to the expansion of Japan’s energy industry and local production and consumption using environmentally-friendly CIS thin-film solar modules made in Japan.”