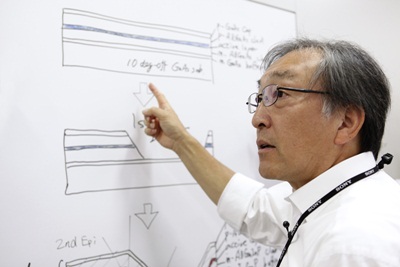 Osamu Kumagai, a senior VP at Sony, has won the 2012 Berthold Leibinger Zukunftspreis.

The award, handed out every two years by the not-for-profit Berthold Leibinger Stiftung organization to celebrate research that has led to key developments in laser technology, recognizes Kumagai’s achievements in the mass production of laser diodes used in successive generations of optical data storage.

Sony has long been at the forefront of this technology, first with near-infrared and red emitters and more recently pioneering the development of blue laser diodes for use in Blu-ray Disc players and recorders and the company’s PlayStation 3 console.

Compared with the previous generations of laser diodes, the blue emitters posed a much more complex engineering challenge because of the make-up of the semiconductor materials required to produce blue light.

Whereas the near-infrared and red laser diodes used in CD and DVD hardware comprised active layers of gallium arsenide (GaAs) semiconductor deposited on top of a host substrate of the same material, blue emitters were initially based on a combination of gallium nitride (GaN) active layers grown on top of sapphire substrates – because GaN substrates were simply not available.

As a result of the lattice mismatch between the GaN and sapphire crystal structures, early generations of blue laser diodes were beset by engineering problems that restricted the manufacturing yield of devices produced on semiconductor wafers, meaning that the individual devices were both very expensive and limited in output power. 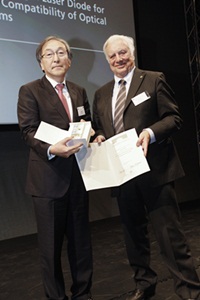 Next stop: green laser diodes
Thanks in part to new kinds of substrate materials, Sony was able to overcome that problem and begin producing the devices in a high-yielding process that delivered cheaper and more powerful diodes that in turn reduced the cost of Blu-ray players dramatically.

The Berthold Leibinger Zukunftspreis also recognizes how Kumagai and his colleagues engineered combinations of diode devices operating at different wavelengths to ensure backwards-compatibility of Blu-ray hardware with CDs and DVDs.

Sony is now working on green laser diodes – the most problematic wavelength in the visible range – and in June the company announced a breakthrough 100 mW GaN-based emitter operating at 530 nm. That device was developed in collaboration with Sumitomo Electric Industries, the key materials partner behind the advances previously made with blue diodes.

Instead, Sony expects the device to find applications in next-generation handheld projectors such as those being developed by US-based MicroVision.

Innovationspreis
As well as the main Zunkunftpreis, for which Kumagai also picked up €30,000, the Berthold Leibinger Stiftung jury awards an Innovationspreis. Earlier this year they selected eight finalists, with the first prize (worth another €30,000) going to Tso Yee Fan, Antonio Sanchez-Rubio and Bien Chann from the Massachusetts Institute of Technology (MIT) and TeraDiode, a spin-out firm co-founded by Chann.

The MIT/TeraDiode team is developing high-power lasers based on wavelength-multiplexed diode lasers, and last year the start-up firm attracted $10 million in a series B round of venture funding designed to help bring the technology to market.

Second place in the Innovationspreis (and €20,000) was awarded to the development team behind the kilowatt-scale “InnoSlab” ultrafast laser for industrial applications, including representatives from the Germany’s Fraunhofer Institute for Laser Technology in Aachen and the spin-off companies EdgeWave and Amphos. 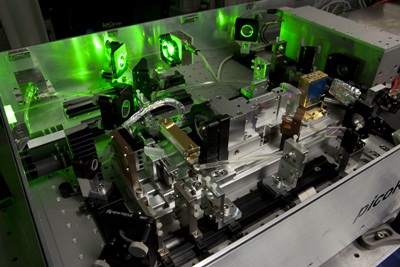 Third place (and €10,000) in the Innovationspreis for 2012 went to Andreas Blug, Felix Abt and Leonardo Nicolosi from the Fraunhofer Institute for Physical Measurement Techniques, Stuttgart University and Dresden’s Technical University, for their development of a real-time control system for laser welding.

Each of the winners received their prize at an awards ceremony held on September 14 in Ditzingen – home of the giant laser firm Trumpf, the company that Berthold Leibinger first joined in the 1950s and where he went on to become managing partner, president and chairman. The company is now controlled by the Leibinger family.