As photonics leaders in the US put their case for funding research to politicians, the laser pioneer picks up Washington’s new award. 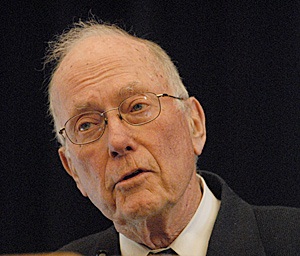 Charles Townes, 1964 Nobel Laureate for his part in the pioneering research that led to the development of the laser, has picked up further recognition for his work as a winner of the very first “Golden Goose” awards.

Set up to highlight the value of state-funded basic research in the US, the new awards represent a bipartisan political effort to educate both Congress and the general public about the human and economic benefits of such work. Six members of Congress in all - four Democrat and two Republican - are endorsing the Golden Geese.

Democrat Congressman for Tennessee Jim Cooper is the main political force behind the awards, coming up with the “Golden Goose” name partly in response to the notorious “Golden Fleece” awards handed out regularly by another Democrat politician, the late William Proxmire. In the 1970s and 1980s, Proxmire highlighted apparently absurd federal research grants as examples of government profligacy.

Cooper has hooked up with the American Association for the Advancement of Science (AAAS) and various other scientific bodies to make the awards, which are intended to honor past work that has demonstrably led to beneficial new technologies – rather than the future promise of current research efforts.

Aside from Townes, the first set of awards also recognizes Osamu Shimomura, Martin Chalfie and Roger Tsien for their discovery of green fluorescent protein, and Jon Weber, Eugene White, Rodney White and Della Roy for their work on coralline ceramics that that ultimately led to the development of human-compatible bone grafts.

US “falling behind” as funding declines
All of the awardees, who are to receive their prizes at a ceremony in Washington, DC, on September 13, began their research in the 1950s and 1960s, with funding from the National Science Foundation, US Navy and the National Institutes of Health.

Congressman Cooper and AAAS chief executive Alan Leshner revealed the first of their Golden Geese in an article published by the Washington Post on September 9. In it, they wrote that the US risked falling behind other nations that are increasing their funding of science and technology development while the US is cutting back.

“We need to get serious about science,” they wrote. Highlighting how basic research can have unexpected pay-offs, they also pointed out: “Charles Townes is hailed as a primary architect of laser technology. Early in his career, though, he was reportedly warned not to waste resources on an obscure technique for amplifying radiation waves into an intense, continuous stream.”

Cooper and Leshner also compared negatively the level of science funding in the US with that in other countries, arguing that although US science funding had increased 10% since 1999 (as a percentage of the economy), in other countries it has risen much more quickly. In China it has increased at ten times the US rate; in Korea six times and Taiwan five times. Equivalent spending in Finland, Germany and Israel has grown about twice as fast as the US, they claimed, warning:

“In the US, additional budget cuts have been proposed to R&D spending for non-defense areas. If budget-control negotiations fail, drastic across-the-board cuts will take effect in January that could decimate entire scientific fields.” 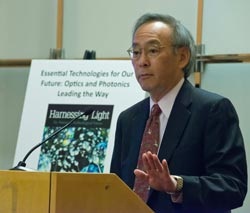 Photonics goes to Washington
Coincidentally, representatives of the US photonics community were in Washington the day before the Golden Goose Awards ceremony, to state their case for funding a public-private national photonics initiative – as proposed by the recent National Academy of Science (NAS) report on the wide-ranging impact and importance of the technology.

That case appears to have some high-profile backing, both political and industrial. Keynote speakers at two events designed to underscore the importance of optics and photonics to federal agency staff and at a Congressional R&D Caucus entitled “Lighting the Way to American Prosperity” included Secretary of Energy Steven Chu and former Intel president Craig Barrett.

In an interview earlier this week with SPIE’s CEO Eugene Arthurs, Barrett echoed Jim Cooper, pointing out that just about every other major economic power – notably the European Union, in particular Germany – had singled out optics and photonics as a key technology for the 21st century. “Unless the US continues to aggressively pursue research and basic technology development in this area, we'll fall behind,” said Barrett. Interestingly, his old company has recently taken matters into its own hands in the area of lithography development, via its equity and long-term R&D investment in key equipment supplier ASML.

Tough decisions
Philip Bucksbaum from the Optical Society (OSA), which co-sponsored the Capitol Hill event along with SPIE, the American Physical Society and the IEEE Photonics Society, summed up the aim of the events in Washington, saying: “It is our hope that the optics and photonics community will use the [NAS] report to bring private industry, universities and government partners together to enable greater economic growth and many more life-enhancing technologies through the expansion of optics and photonics.”

“Today, US agencies and institutions are facing difficult funding decisions due to looming budget cuts and a tight fiscal climate,” Bucksbaum added. “As the federal government determines how to prioritize funding levels for science and technology programs, our community can use this landmark study to support those decisions, as it provides specific examples of the technological and economic value of optics and photonics in a broad range of sectors.”

Other speakers at the events included Thomas Baer from the Stanford Photonic Research Center, entrepreneur and private astronaut Greg Olsen, now of Princeton University, and Martin Richardson of the Townes Laser Institute at the University of Central Florida.