NASA's Mars rover Curiosity powers up its laser and examines the neighborhood. 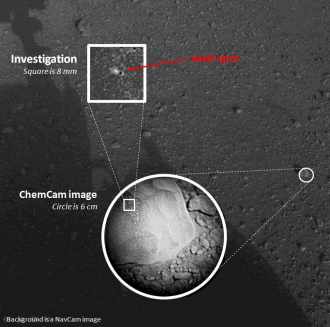 After nearly two weeks on the Martian surface, the Mars Science Laboratory's Curiosity rover has used its ChemCam laser characterization system in earnest for the first time.

The instrument was fired at a fist-sized rock christened "Coronation" by the Curiosity team at Pasadena's Jet Propulsion Laboratory, marking the start of a program to use the rover's laser-induced breakdown spectroscopy (LIBS) technique to analyze the Martian environment.

Coronation, adjacent to rover's landing spot in Gale Crater, was intended to serve as an initial test subject to assess the instrument's survival after its journey to the planet. But since all initial indications are that ChemCam functioned flawlessly, the team will collect LIBS data from Coronation as ChemCam's first examination of the rover's surroundings.

"That rock was picked as a suitably located target," commented Guy Webster of JPL to optics.org. "The goal of this initial use of the laser on Mars was to characterize the instrument's performance, including its pointing ability, and it was anticipated that the activity could also serve as useful target practice for characterizing the instrument. But we also planned that the test could provide bona-fide science results of interest."

As the first target for ChemCam, Coronation will provide a potentially valuable baseline for future results. "It will be useful to have information about typical Martian rocks, for a better understanding of results from rocks chosen as targets for other reasons," noted Webster.

ChemCam hit Coronation with 30 pulses of its laser during a 10-second period, delivering "more than a million watts of power for about five one-billionths of a second," according to JPL. That level of power is sufficient to ablate atoms and ions from the rock into a plasma of electronically excited states, and the instrument then catches the light emitted by that plasma and analyses it to determine the elemental composition of the target rock.

No detailed results from the LIBS analysis of Coronation have yet been made available, but JPL and ChemCam's developers at Los Alamos National Laboratory (LANL) declared themselves delighted with the instrument's performance and with the data collected from the Coronation rock.

"We got a great spectrum of Coronation; lots of signal," said Roger Wiens of LANL. "Our team is both thrilled and working hard, looking at the results. After eight years building the instrument, it's payoff time."

Those signals will be examined to check whether the composition of the rock changed as the pulses progressed. If so, that could indicate dust or other surface substances being penetrated and revealing different material lower down. The ability of LIBS to "clean" a spot of Martian rock of its dust and weathering was always intended to be a part of ChemCam's arsenal.

It even seems that ChemCam's performance surpassed expectations. "It's surprising that the data are even better than we ever had during tests on Earth, in terms of signal-to-noise ratio," said Sylvestre Maurice of ChemCam co-developers the Institut de Recherche en Astrophysique et Planetologie, France. "It's so rich, we can expect great science from investigating what might be thousands of targets with ChemCam in the next two years."