Survey of more than 7500 people working in photonics suggests that nearly nine in ten find their job highly satisfying. 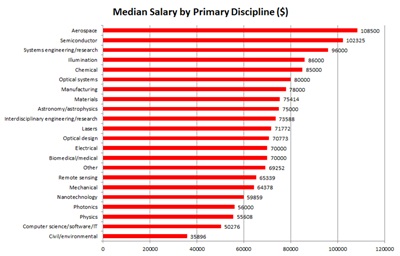 A new survey has found that the vast majority of people working in the global optics and photonics community have very high levels of job satisfaction.

The analysis of more than 7500 responses represents the second such annual survey by the International Society for Optics and Photonics (SPIE), and this year it featured additional questions relating to the enjoyment and perceived significance of their roles.

Above-average pay
As with last year’s analysis, the survey confirmed that jobs in photonics pay well above the average level – especially so in more developed countries. Globally, the median salary for a photonics worker was found to be $73,000, while in the US that figure was $106,000. However, the best-paid photonics workers live in Switzerland, where the median salary was found to be just over $120,000 (compared with a country average of $50,000).

Although well above average wages, the global median salary for those working in photonics did fall slightly from the figure of $75,000 recorded in last year’s survey. However, that is thought by the SPIE report’s authors to be partly a result of the slide in the value of the Euro currency versus the US dollar over the past year.

Median salaries for photonics workers in North America, Oceania and Asia were all found to have increased slightly or remained stable when compared with the 2011 survey results, while in Europe the figure for higher-income countries dropped from $72,000 to $63,000.

Commenting on that finding, SPIE CEO Eugene Arthurs said: “The stability evidenced by similarities in year-over-year results and the strong salary levels as compared to levels across all jobs reflect the strength of the optics and photonics sector and the high value that these jobs contribute to the economy.”

“We hear from our academic members in many industrialized regions that their graduates often have several job offers awaiting them on graduation, and we hear from industry that some regions have trouble finding qualified new employees," Arthurs added, hinting that there is a strong need to produce more graduates with optics and photonics expertise.

Aerospace on top
Once again, the aerospace and military sectors turned out to be the best-paid within photonics. Median salaries for those working in aerospace stood at $108,500, while the semiconductor industry (a new category this year) came out second at just over $102,000.

Bottom of the pile in terms of pay came those working in civil or environmental disciplines, earning a global median salary of only $36,000.

And once again the survey results emphasized the significant premium attached to non-academic roles, although the degree of that premium is highly dependent on location.

In North America, the median academic salary of $78,000 compares with nearly $112,000 for the commercial sector (a premium of 43%), but in higher-income Europe the premium appears far less significant. Here, photonics academics earn a median salary of around $57,000 rising to only $67,000 in the commercial world (a premium of 18%).

Overall, though, the survey results emphasize that pay is not the most important factor for the majority of respondents. Photonics represents a rewarding career option as far as job satisfaction is concerned, and particularly so for those who value the need for autonomy and independence.

It also suggests that photonics workers are ambitious people, with only one-third saying that they have good opportunities for promotion within their organizations.

And for those who are more motivated by maximizing their salary? The best option appears to be to find a leadership role in the aerospace sector for a company based in Switzerland…

• SPIE’s salary survey, conducted in April and May 2012, received more than 7500 validated responses from 101 different countries. For the full survey results and analysis, visit spie.org/salary.