Back to the future: UK team makes solid-state maser

Pentacene-doped organic active material that amplifies at 1.45 GHz may one day find applications in molecular biology. 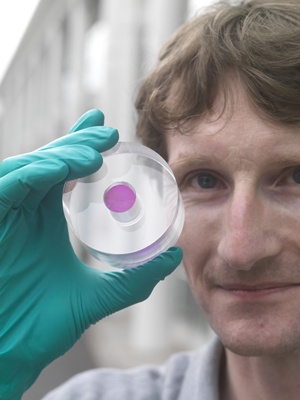 Mark Oxborrow and the solid-state maser

Scientists at Imperial College, London, and the UK’s National Physical Laboratory (NPL) have made the first solid-state maser that operates at room temperature, suggesting that the near-forgotten technology could find a number of commercial applications – provided that it can be coaxed into working for longer than a fraction of a second.

Reporting their work in the journal Nature, the team says that the breakthrough means the cost of making and operating coherent beams of microwaves could now be dramatically reduced – and that masers could finally begin to emulate the widespread ubiquity of the laser.

The maser (microwave amplification by stimulated emission of radiation) is known as the forerunner of the laser, and is normally based around a ruby crystal, the same material that formed the basis for the very first optical laser. But for most masers to operate effectively, the crystal must be cooled to temperatures of close to absolute zero.

Other masers, such as atomic and free-electron versions, have also been developed, although these are also incompatible with commercial uses as they require vacuum chambers and pumping.

By using a completely different approach and an organic active material – crystals of pentacene-doped p-terphenyl – the new maser instead works at room temperature, in air, and without the need for any magnetic field, amplifying radiation at 1.45 GHz.

NPL’s Mark Oxborrow (pictured), a co-author of the study, said: “For half a century the maser has been the forgotten, inconvenient cousin of the laser. Our design breakthrough will enable masers to be used by industry and consumers.”

Coming in from the cold
As the research team admits, there is a long way to go before that can happen. The current device only works in pulsed mode and for fractions of a second at a time – though that was also true of the first ruby lasers back in 1960.

And as Neil Alford, another co-author and head of the department of materials at Imperial, pointed out: “When lasers were invented no one quite knew exactly how they would be used, and yet the technology flourished to the point that they have now become ubiquitous in our everyday lives.” 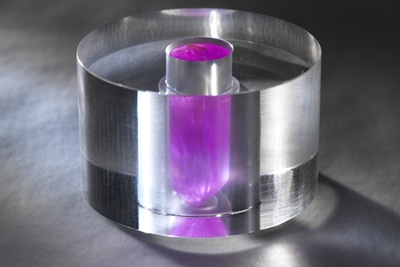 Ruby-colored; but not ruby

“We’ve still got a long way to go before the maser reaches that level, but our breakthrough does mean that this technology can literally come out of the cold and start becoming more useful.”

As well as extending the lifetime of the new maser and getting it to work in continuous-wave mode, one of the next steps for the team will be to get the device to operate over a wider range of frequencies to make it more useful. They will also search for other masing materials that consume less power than the current design, as well as ways to shrink it.

But if those targets can be met, Alford and Oxborrow anticipate applications in medicine, where the devices might become useful in imaging applications, chemical sensing and improved detectors for future radio telescopes.