Back-end facility in city of Wuxi represents an investment of more than €100 million by the German lighting giant. 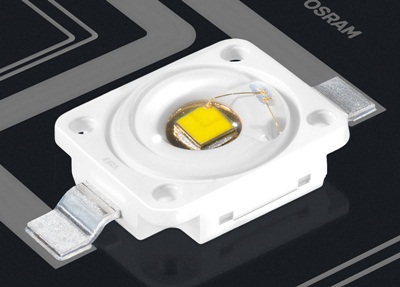 Osram, one of the world’s leading lighting companies and a pioneer in the emerging market for solid-state lighting (SSL), has broken ground on its giant new LED manufacturing facility in China.

The Germany-headquartered company says it is investing upwards of €100 million to build and operate the 100,000 m2 back-end fab over the next five years. Together with support from the local Jiangsu Province authorities, the site is expected to create around 1600 jobs after it is completed in late 2013.

China represents a lighting market already worth €8 billion each year, says Osram, and the wider Asia region is expected to account for some 45% of the global lighting market by the end of the decade – up from 35% today.

Korea, China and Taiwan are also home to several of the world’s leading LED chip manufacturers, while China in particular has invested heavily in the development of a local LED manufacturing industry and solid-state lighting installations. Within China, the wafer manufacturing capacity of domestic LED makers has increased by a factor of 20 over the past three years thanks to generous government support, and Jiangsu has been at the forefront of the drive.

Osram’s CEO Wolfgang Dehen said in a company statement: “China is already today the biggest sales market [for lighting], with significant future potential. The new LED assembly plant enables us to better participate in the strong market growth in China and further extend our solid position in Asia.”

Osram already has sizeable LED manufacturing facilities in Regensburg, Germany and Penang in Malaysia. It can increase front-end LED chip manufacturing capacity, which takes place mostly in Regensburg, by using larger wafers, but the company anticipates that production at the Penang site will become constrained within a few years.

By building the Wuxi site and running both front-end and back-end processes in Penang, Osram says that it will be able to perform each of the key parts of the manufacturing process across two different sites. 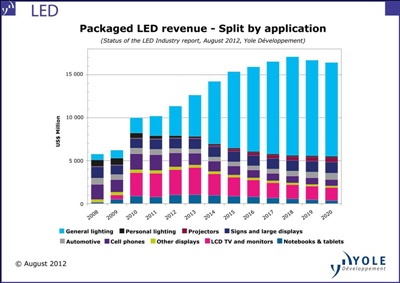 LED market to peak in 2018
Meanwhile a new report from the French analyst company Yole Développement and the European Photonics Industry Consortium (EPIC) suggests that the annual global market for packaged LEDs will peak at just over €17 billion in 2018. That would represent growth from Yole’s figure of €11.4 billion for 2012 – and would be almost entirely due to the demand created by general LED lighting.

Mukish expects that adoption to really kick in from 2014 – at which point general lighting will account for just over half of the market for packaged LEDs. But this will demand a factor-of-ten reduction in the per-lumen cost of packaged LEDs suitable for lighting applications compared with current prices.

The analyst sees this being achieved through a combination of larger wafers on which to produce LED chips (both Cree and Osram are migrating to six-inch wafer platforms), higher manufacturing throughput and yields, and improved phosphors and optics.

The transfer of lighting-class LED production to China will also be an important factor in cost reduction, but most LED producers in the country still lag behind their rivals in terms of technology maturity and raw LED performance. In that respect, Osram’s expansion into China looks significant.