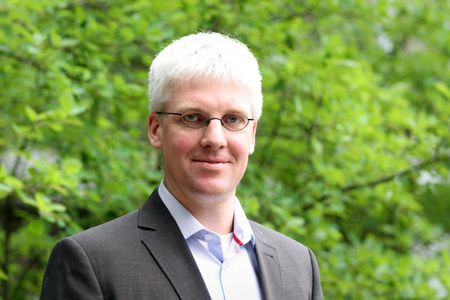 This year’s one million euro Alfried Krupp Prize for Young University Teachers has been awarded to Professor Christian Koos of Karlsruhe Institute of Technology (KIT), Germany. The board of trustees of the Alfried Krupp von Bohlen und Halbach Foundation decided in favor of the 34-year-old engineer, who conducts research into and teaches on photonic communication technology. Koos won over 65 other young scientists who had been proposed for the prize.

At the Institute of Photonics and Quantum Electronics (IPQ) and at the Institute of Microstructure Technology (IMT) of KIT, Koos studies nanophotonic components, by means of which communication processes can be accelerated and their energy efficiency enhanced.

With such components, high-performance optical circuits can be integrated on microchips for the transmission and reception of data rates of several terabits per second, corresponding to about one billion simultaneous telephone conversations. Instead of expensive and rare compound semiconductors, silicon is used for chip manufacture.

Koos’ work focuses on hybrid integration methods to combine silicon waveguides with organic materials. Optical properties of these materials can be adjusted specifically via the molecular structure. Hence, a large variety of components can be implemented on a single chip.

Research conducted by Koos and his group contributes, among other things, to reducing the energy consumption of the internet. Today’s information and communication technology already already accounts for more than 10% of total electricity consumption in Germany, and data traffic is growing continuously.

About Koos and the Award

Koos studied electrical engineering and information technology at the former Universität Karlsruhe , a predecessor institution of KIT, and was conferred his doctorate at the Institute of Photonics and Quantum Electronics. Then, he moved to Carl Zeiss AG and headed the technology radars Nanotechnology and Metrology within the Corporate Research and Technology Department.

Kit is it: Karlsruhe Institute of Technology.

In March 2010, Koos accepted the professorship for photonic communication technology at KIT. Koos made more than 100 frequently cited publications in international journals and proceedings and about the same number of expert presentations. He has applied for more than 15 patents

Since 1986, the Alfried Krupp Prize for Young Scientists holding a first professorship at a German university has been granted annually by the non-profit Alfried Krupp von Bohlen und Halbach Foundation. The prize money of 1 million euros is intended to enable researchers to improve their working environment over a period of five years irrespective of public funding and to advance their research and teaching work.

The Alfried Krupp von Bohlen und Halbach Foundation is a German philanthropic foundation, created by Alfried Krupp, former owner and head of the Krupp company, once the largest company in Europe.