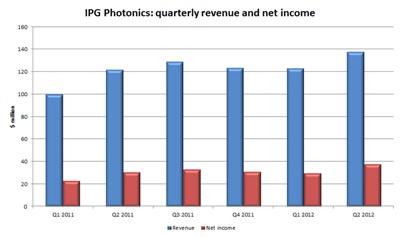 IPG Photonics has posted record figures for both sales and net income in the second quarter of its fiscal 2012, shrugging off macroeconomic worries as business grew rapidly across Europe, Russia, China and Japan.

The world’s leading maker and provider of fiber lasers registered a 13% year-on-year increase in sales to $137.9 million, coupled with net income of $37.7 million, an increase of 23%. The higher-than-expected earnings figure, coupled with forecasts of a very strong third quarter, sent IPG’s stock up sharply in early trading after the announcement.

CEO Valentin Gapontsev attributed the strong performance to three key trends: the wider adoption of lasers in general by manufacturing companies around the world; the even faster adoption of fiber lasers; and the fact that a number of key industries – including automotive and consumer electronics in particular – were holding up well despite wider economic concerns, and investing in new technologies.

In north America, the transition to high-strength steel by the auto industry is only just beginning, and Gapontsev noted that one of IPG’s OEM customers in the region believes that it will need thousands of new cutting systems as the transition unfolds – indicating the magnitude of this opportunity for lasers of all kinds.

The CEO told investors that IPG can now list five of the world’s largest automotive companies among its customers, and that their adoption of fiber lasers would be likely to increase as aluminum also becomes a more widespread feature in car designs, because fiber laser technology is particularly well suited to working with the metal.

CFO Tim Mammen also noted that sales of IPG’s medium-power fiber lasers showed dramatic growth of 32% year-over-year, as they became more widely used in cutting and welding of thin metal parts and in consumer electronics manufacturing. Mammen added that IPG’s tools were displacing other lasers in these applications.

Unit sales of IPG’s relatively new quasi-continuous-wave (QCW) lasers, which are designed to challenge traditional lamp-pumped YAG lasers, were also up very sharply – thanks in part to a price reduction of around 30% that has made the tools highly competitive.

Russia rebounds
Gapontsev may have been especially pleased to report record quarterly sales of $10.9 million to his homeland of Russia, where IPG originated and where it is also expanding its manufacturing facilities currently. The increase was thanks to stronger demand from both materials processing applications and higher sales of fiber components used in telecom applications.

With soaring profits and the $168 million raised via its follow-on offering of stock earlier this year, IPG has a huge pile of cash on its balance sheet. During the latest quarter it used $55.4 million from that pile to re-purchase the outstanding minority interest in its subsidiary NTO IRE-Polus from the Russian state’s “Rusnano” investment vehicle.

Rusnano had acquired a 22.5% stake in IRE-Polus through two transactions back in December 2010 and June 2011, which at the time had allowed IPG to accelerate its investment in R&D, sales and manufacturing infrastructure in Russia.

But with the extra financial flexibility provided by the recent stock offering, Gapontsev said that now was an ideal time to regain complete ownership of the subsidiary and fully benefit from the opportunities emerging in Russia as the country’s industrial base goes through a period of modernization.

Gapontsev and Mammen surprised analysts with their expectations of a strong third quarter thanks to robust bookings and enquiries in early July. They predicted that sales will grow by around 9% sequentially to between $145 million and $155 million.

That and the unrelentingly upbeat message from the company sent IPG’s stock price soaring. Shortly after announcing the latest results the firm’s share price was up 15% at close to $55, equating to a market capitalization of just under $3 billion.