But the infrared imaging company increased earnings despite sharp year-over-year contraction in sales. 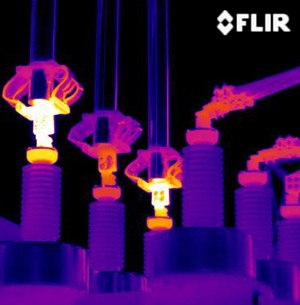 The CEO of FLIR Systems has described the thermal imaging company’s second financial quarter of 2012 as “extremely disappointing”, admitting that the latest cost-cutting decisions being made to maintain profit margins were “very unpleasant for us, and for our employees”.

Earl Lewis confirmed FLIR’s prior announcement of a profit warning for the full year, declaring that the second quarter had proved to be a difficult one:

“Macroeconomic conditions impacted many of our largest markets,” he said, reporting sales of $338.3 million – down 14% on the figure that FLIR had posted a year ago, and down 3% sequentially from the first quarter of 2012.

The decline was spread relatively evenly across FLIR’s two business divisions, with revenues from the commercial systems unit down 12% on last year, to $189.8 million. Sales from the government systems unit dropped at a faster rate, down 16% year-on-year to $148.5 million – of which surveillance applications accounted for by far the largest chunk, at $119.5 million.

However, such is the magnitude of the cost-cutting measures introduced by the company over the past year that FLIR also recorded a sharp increase in operating profit and net earnings.

At $60.7 million, FLIR’s figure for quarterly operating profit was 45% higher than a year ago – thanks to a huge reduction in selling, general and administrative costs, and a more modest cut to research and development spending.

Cost-saving moves
Lewis told investors about a number of cost-saving decisions that had been taken. Aside from cuts to staff numbers, FLIR has consolidated much of the ICx Technologies business that it acquired nearly two years ago, and had also moved its thermography business into a new building that enjoyed much lower running costs.

The most recent round of cuts resulted in a restructuring charge of $6.8 million in the latest quarter, but should save FLIR some $17 million in annual running costs. Within the government systems unit, those cost-cuts have been skewed towards the “detection” business segment.

Bill Sundermeier, president of FLIR’s government systems division, told an investor conference call that the latest quarter included both staff reductions and a consolidation of “several locations” within the detection segment, highlighting that the company’s aim was to steer its revenue stream away from contract research and development and towards sales of physical products.

As government spending on military programs and projects declines in general, FLIR is pursuing a strategy to become more international, as well as less dependent on federal budgets and on US Department of Defense spending in particular.

However, some areas of that business remain robust, and Sundermeier said that FLIR is increasing its presence in the unmanned aerial vehicle (UAV) space, with more than $8 million in new orders relating to thermal cameras for the US military’s “Fire Scout” UAV.

As FLIR’s government systems business skews away from pure military applications and more towards border and airport security applications, the company is beginning to offer complete security systems covering not just infrared imaging, but also radar systems and detection of explosives and biohazards.

The company showed off its so-called “command and control center”, which combines all of the various sensor systems, at the recent Farnborough Air Show in the UK.

Pyrometry partner
Like other infrared imaging firms, FLIR is aiming to expand its sales at the lower end of the commercial systems market, and appears to be making some inroads here with a booking for some 2000 of its “iX” series cameras to be used in pyrometry applications via a distribution partner in Japan.

But in the latest quarter the company’s commercial systems division was also hit by delayed orders for camera cores, lower-than-expected sales of premium thermography products, and much lower bookings from OEM customers in Europe specializing in marine imaging systems, as boat builders in France and Italy in particular were hit hard by macroeconomic worries. 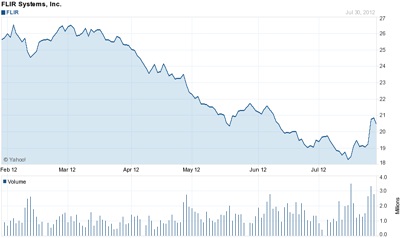 Despite all of those concerns, thanks to the cost-cuts FLIR remains profitable and is now sitting on a cash pile in excess of $400 million (offset by long-term debt of $248 million). While CEO Lewis dismissed suggestions that some of that cash could be distributed in the form of a special shareholder dividend, he did admit that further acquisitions could be on the agenda.

“We are looking at a couple [of acquisitions] right now that seem to make some sense for us over the long run,” he said. “They're not huge, but they're not small either.”

Lewis wrapped up FLIR’s investor call with an apology for the weak Q2 performance, adding: “We’re going to work hard to make sure that it doesn’t happen again.”