Harvest from the sun: Groningen and FOM's photosynthesis-inspired technique.

Chemists and materials scientists from the University of Groningen and the FOM Foundation, both in the Netherlands, have found a way of “harvesting” infrared light more efficiently. For this they use special molecules, which act as light antennae to capture the energy from weak infrared light.

The antennae transmit the energy to the nanoparticles to which they are attached. These particles subsequently convert two weak captured photons into a single strong, energy-rich photon, a process termed upconversion.

The antennae molecules amplify this process 3300 times, which represents a considerable improvement for potential applications in solar cells or medical imaging techniques, for example. The research was published on 15 July 2012 in Nature Photonics.

Infrared radiation usually has too little energy to release electrons in solar cells. This relatively weak light is therefore lost in the conventional solar-electrical energy conversion processes. One possible way of still being able to make use of the energy of infrared light is ‘upconversion’ - effectively adding together the energy of two weak photons to produce a single stronger photon (as visible light).

Factor of 3300 boost
"There are inorganic materials made from rare earth metals that can facilitate this upconversion process," explains Kees Hummelen, Professor of Organic Chemistry at the University of Groningen, who leads the FOM-focus group called Next Generation Organic Photovoltaics.

"However these materials absorb very few infrared photons. We have therefore attached organic molecules to them as antennae that can capture these photons and transmit the energy to the upconversion material. With this, the entire process of infrared absorption, upconversion and the emission of visible light is being increased by a factor of 3300."

Hummelen’s group is working to further increase the harvest of infrared photons. "Even with our antennae set-up we still only capture a limited amount of the infrared light. And we believe an even better yield can be obtained," predicts Hummelen. However the process of upconversion inside the nanocrystal is still rather inefficient. 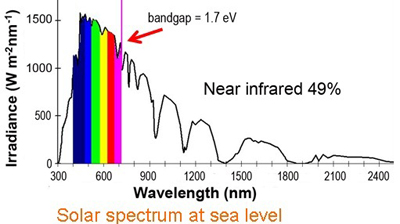 About 49% of the radiation is in the infrared or near infrared.

"Two photons must come together in the material within a short space of time. In practice the efficiency of this process is still very low. However the harvest is already much better, so we have made the first step," says Hummelen. Therefore, the work of the researchers in Groningen is mainly a proof that infrared photons can be harvested by means of upconversion.

Solar cells
The most promising application of the Groningen-FOM development is in solar cells, as about half of all the solar energy reaching the Earth's surface is in the form of infrared light (see typical daylight spectrum, left).

"A German group is going to incorporate our nanocrystals with antennae in solar cells to test these in practice," says Hummelen, who since last year has led a FOM focus group researching the new generation of organic solar cells.

By capturing more infrared light, solar cells will be able to pass the so-called Shockley-Queisser efficiency limit. For solar cells that consist of one color that limit is 32 per cent. 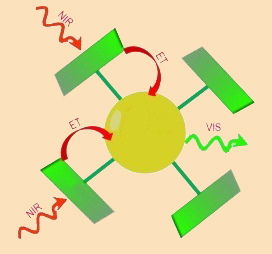 Power of the crystal: Nanocrystal with IR-absorbing antennae.

In the FOM focus group at the University of Groningen researchers combine organic and inorganic chemistry. "These worlds are usually quite distinct," says Hummelen. "We have brought them together, with this success as the result."

The researchers modified an organic dye that can absorb infrared light so that it may be attached as an antenna to a lanthanide nanocrystal. About 60 of these antennae are attached to a single crystal. "If you try to place more on the crystal then they disrupt each other."

Hummelen adds, "The antennae capture the infrared energy and transmit it to the nanocrystal, which subsequently uses it to produce energy-richer photons that have enough energy to release an electron in solar cells, for example. "Our inspiration partly came from the photosynthesis process in plants," explains Hummelen. “There you have a ring of light-absorbing molecules around an active centre."

The research was largely carried out by FOM PhD student Wenqiang Zou, masters student Jeremio Maduro and postdoc Cindy Visser and took place at the Stratingh Institute for Chemistry and the Zernike Institute for Advanced Materials (ZIAM), both part of the Faculty of Mathematics and Natural Sciences at the University of Groningen. Kees Hummelen and Maxim Pchenitchnikov supervised the work.