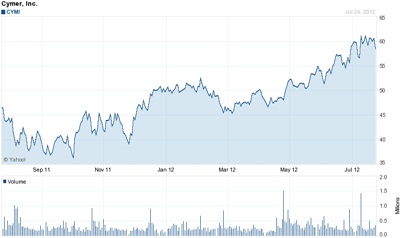 Lithography light source provider Cymer has posted a net profit of $9.6 million for the second quarter of 2012, down sharply on the same period last year as the San Diego company increased its spending on extreme ultraviolet (EUV) technology development.

But that increased level of R&D spending wasn’t quite as high as had been expected – partly thanks to improvements to EUV optics that are now much better able to withstand the hostile environment of the source.

Cymer’s CEO Bob Akins told an investor conference call that the company had now begun integration and testing of its first EUV 3300 source for volume wafer production, and that it would be shipped to ASML in the current quarter.

One of the many ongoing problems with EUV source development has been the lifetime of the collector optics in the intense environment created by the laser-generated plasma that Cymer uses to produce the EUV light.

The source optics now feature a new capping layer designed to protect the components from erosion, and the chipmaker customers who are using the updated design are said to have seen a 50% increase in the useful lifetime of the collectors – from a typical 20 billion pulses to 30 billion.

According to Akins, the new level of hardiness equates to a lifetime of around 12 weeks in the field – moving towards the one-year lifetime that the chipmakers have asked for. The improved lifetime also means that the developmental components have to be replaced less frequently, translating to lower R&D costs for Cymer.

Ramping power
Cymer’s EUV sources are now said to deliver a reliable 50 W output at a duty cycle of 40%. ASML is aiming to start delivering EUV lithography tools with an output power of 100 W, and a throughput of 70 wafers per hour, to its lead customers early next year – although its “worst-case scenario” will be a 50 W source with a maximum 100% duty cycle if the 100 W sources are not ready by then.

In the laboratory, Cymer says it has actually demonstrated 158 W EUV source output with a more powerful CO2 drive laser – albeit at a low duty cycle.

The company is regarded as the most technologically advanced EUV source provider at present, and is pouring R&D funding into the technology to speed development, meet the ASML schedule and maintain a lead. That is borne out by the company’s latest statement of operations, which confirms that Cymer’s research spending in the first half of 2012 was $92.6 million – up 60% on the first half of 2011.

Akins says that around three-quarters of the company’s total research expense is currently going into EUV development, and that although the sums required are “not inexpensive”, Cymer’s financial strength means that the investment is sustainable.

Part of the current expense is to build a new facility at Cymer’s San Diego headquarters, something that should be completed by November this year.

DUV sales steady
While EUV is central to Cymer’s future, right now its business is dominated by sales of excimer laser sources for more conventional lithography tools, and here it appears that demand is holding steady despite the weak macroeconomic picture.

Sales in the second quarter of 2012 were $149.3 million – down slightly on the same period last year, although at that point the semiconductor equipment market was in a much stronger demand phase in general.

In their guidance for the current quarter, Cymer’s executive team said that revenues should be virtually flat with Q2, although R&D expenses will increase once again as the race to ensure EUV’s readiness for volume production hots up.

Although the first EUV tools will be delivered to chip makers next year, it is not expected that they will move into full production until 2014 – with initial adoption at DRAM and logic chip makers, and NAND manufacturers expected to follow later.

And although there is still some skepticism about the ultimate success of EUV, the recent pledge of long-term investment by Intel and ASML appears to have reassured investors that the technology will be viable.

Much like its key customer ASML, Cymer has enjoyed a very strong run in its stock valuation in recent months, and its share price is currently close to a decade-long high.

In early trading after the latest financial update, Cymer's stock rose slightly to just over $59, equivalent to a market capitalization of $1.8 billion.