Steady sales and recent investment by Intel propel the lithography company to its highest-ever value. 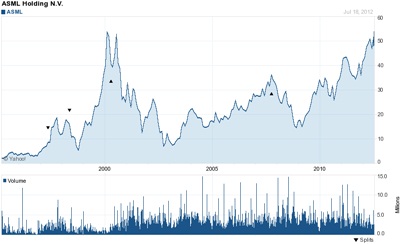 Shares in the market-leading semiconductor lithography company ASML have reached a record high on the back of solid financial results in the second quarter of 2012 and an equally solid outlook.

At close to $54 in trading on the Nasdaq market shortly after the Netherlands-based company’s managers fielded investor questions on its latest developments, ASML’s stock value was higher than at any time in the past 16 years – higher even than the heady tech-boom days of 2000. At that level, the firm has a market capitalization of just over $22 billion.

The positive sentiment has in part been generated by last week’s news that Intel would purchase up to a 15% equity stake in ASML and subsidize the development and commercialization of both extreme ultraviolet (EUV) lithography steppers and tools for patterning the next generation of silicon wafers, which will increase in size from the current 300 mm standard to 450 mm diameters.

Peter Wennink, ASML’s CFO, described results in the latest quarter – in which the company posted net sales of €1.23 billion - as “almost boring”. The revenue figure represented a slight sequential decrease, while the company registered net bookings of €949 million.

“We did exactly what we said we would,” he told investors, of a quarter in which sales of systems destined to pattern processor chips for ultrabooks were one of the primary revenue drivers.

2013 visibility
While many of ASML’s peers remain concerned about the level of future demand for their products, the longer lead time associated with lithography steppers gives the Dutch company greater visibility than most.

Although Wennink and CEO Eric Meurice are not yet prepared to give any quantitative guidance for 2013, they did say that they have some visibility, with Wennink commenting that “2013 doesn’t look bad”.

Sales in the second half of 2012 are expected to continue at more or less the same rate as the first half, with Wennink predicting full-year revenues to end somewhere between €4.7 billion and €4.9 billion.

Although that would represent a significant decrease from the record-breaking sales figure of €5.65 billion posted by ASML last year, it would still be the firm’s second-best result ever. 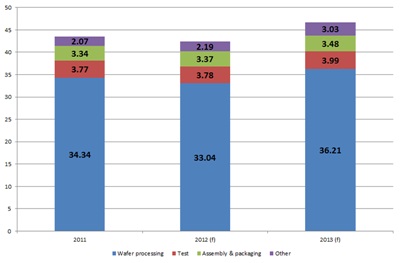 That sentiment was echoed in a forecast for total equipment sales made by the Semiconductor Equipment and Materials International (SEMI) industry group last week at the Semicon West exhibition.

SEMI is now expecting sales of $42.38 billion during 2012 – which would make it the fourth-highest year ever for equipment spending by the industry, and down only 2.6% on what was a very strong 2011.

Denny McGuirk, the trade organization’s CEO, added that total semiconductor equipment spending would grow to nearly $47 billion next year, as the industry continues to absorb newly added capacity to make chips used in smart phones, tablets and other mobile devices. If that total proves accurate, it will make 2013 the second-best year on record for the sector overall, after the $47.7 billion spent during the 2000 tech boom.

EUV progress
On EUV specifically, ASML has now completed building the dedicated facility where it will produce the new steppers, and says that tool integration is “on track”. It has just received orders for four more NXE:3300 production tools, bringing unit orders for the systems so far to 15. The first of those EUV systems could be shipped later this year, with the next ten machines following during 2013. The four new EUV system orders will follow in 2014, Wennink said.

The main struggle with EUV currently is increasing the power and stability of the light source so that the tools can be used to pattern wafers faster and more productively.

ASML now says that the capability of 50 W laser-driven EUV sources from Cymer has been “repeatedly demonstrated”, with the potential for 105 W confirmed in the laboratory.

With suitable stability and uptime, the 105 W level of power would enable chip manufacturers to pattern at a rate of 70 wafers per hour. But this compares with the 230 wafers per hour that is possible with ASML’s current generation of NXT tools, which are based on 193 nm excimer laser sources.

CEO Meurice told investors that the partnership with Intel, and perhaps more of ASML’s key customers, will greatly assist the development of EUV tools capable of patterning at much higher speeds in the future.

He described the move as a “cost efficient” way to keep the industry closely aligned on the timing and cost of EUV tool introduction. Meurice also indicated that although Cymer’s EUV source is currently the most advanced, with EUV systems only becoming widespread in around five years, there was still time for other source developers to catch up.

ASML is also assembling a pilot tool featuring a discharge-driven EUV source provided by developer Ushio, and is working with Gigaphoton on another laser-driven option.