Partnerships take Euro-photonics to next level

Photonics21 annual meeting hears of progress in photonics as a Key Enabling Technology, and plans to elect a new president by September. 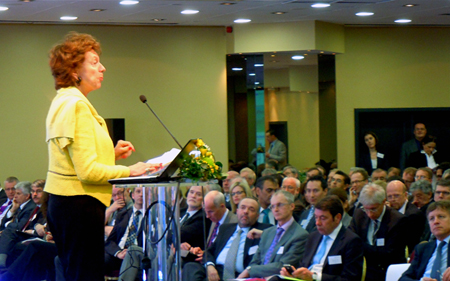 At today’s Photonics 21 Annual Meeting, Neelie Kroes, the European Commission’s Vice President, confirmed her support for the foundation of a public-private partnership (PPP) within Horizon 2020 with Photonics 21, the pan European Technology Forum.

She told the gathering of almost 300 European photonics professionals: ”Europe needs to face up to the challenges of a rapidly globalizing economy. The photonics sector can unleash massive economic potential as well as help to deliver the digital agenda for Europe. EU policies that support R&D as well as demonstrations and applications are crucial to drive Europe’s competitiveness.”

“A public-private partnership in photonics based on a serious commitment from industry will help to unlock Europe’s innovation potential an bring to market products that will shape the future of our economy.”

Kroes said that such a PPP would bring Europe a step further towards addressing the continuing economic crisis and help to close the gap between scientific excellence and manufacturing innovation.

At the end of Neelie Kroes’s presentation, Liz Rogan, CEO of the Optical Society of America, presented her with the OSA’s Advocacy of Optics Recognition Award. Rogan commented, “This recognition is bestowed upon public servants who have strongly demonstrated supported for optics and photonics. Our Public Policy Committee chose you because of your enormous hard work and focus on championing photonics as part of the Key Enabling Technologies here in the EU.” 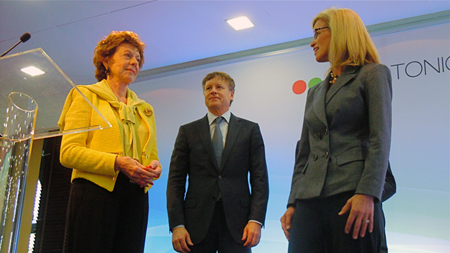 ”Not only have you had an effect here, but you have had a global impact. Many other countries including the United States will be following these frameworks and will hopefully will be mimicking and following the opportunities that you are laying out here.”

”We so much appreciate the fact that you understand the importance of science and particularly photonics and how it helps innovation globally. So on behalf of the OSA and its members I thank you with this recognition.”

Kroes seemed slightly taken aback at this eulogy and quipped, “Normally you will have to wait for your funeral to hear such a speech, so thank you so much for this wonderful surprise. However, I must also thank my team for their hard work.”

KET and a photonics PPP

Other presentations during the day-long conference considered photonics as a Key Enabling Technology (KET). Notably, Giorgio Anania’s session on Strategic Objectives for the Next Decade emphasized the European photonics industry’s commitment to a PPP, with “four-fold leverage public support of €1.4 billion towards the creation of a €7 billion development fund”.

Outgoing Photonics 21 president Martin Goetzeler, who also announced earlier this month that he is to quit his post as COO of Osram, told the gathering, “Photonics 21 welcomes the opportunity for a PPP partnership, which would ensure long-term investment security over the next seven years and positively impact the European job market with the creation of up to 100,000 new jobs.”

Goetzeler added, “Photonics innovation in Europe tends to fall down in the stage between successful scientific achievement and the development of pilot-scale industrial deployments, the latter being the crucial stage when jobs may start to be created.” Following the departure of Goetzeler, a new Photonics21 president is expected to be in place by September. 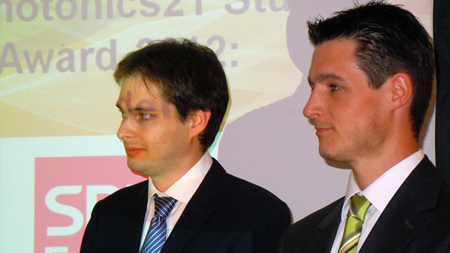 The foundation of a PPP is expected to meet these concerns and bring to fruition the recommendations of the KET High Level Group 2011 report, which called for action on KETs. The proposal for the Horizon 2020 framework incorporates those proposals and also called for “commitment from all players".

Photonics 21 is also keen to support the development of the next generation of photonics innovators, such as through its Education and Training workgroup. This year – for the fourth year running – Photonics 21 presented a student award, which included a €5000 cash prize to two outstanding students of photonics-related science.