Prime Minister of Saxony Stanislaw Tillich is the guest of honor as the organic PV specialist officially opens a pilot-scale production line. 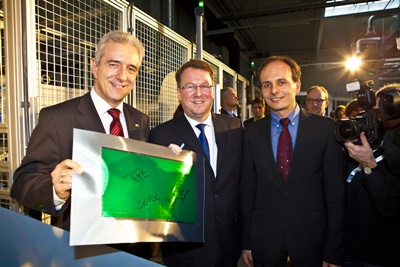 In a ceremony featuring 300 guests, Stanislaw Tillich - the Prime Minister of the German state of Saxony – was guest of honor, and he hailed the company’s cutting-edge technology as “ready to change the world”.

The pilot line is the result of a €14 million investment by Heliatek, and will support an annual manufacturing capacity of around 3 MW when switched on later this year. CEO Thibaud Le Séguillon said of the new facility, built in just six months:

“We have achieved an important milestone on our way to the commercialization of organic solar films based on small molecules. Now comes process integration.” Le Séguillon added that Heliatek was aiming to roll out commercial products this fall.

However, the initial production capacity supported by the pilot line will be tiny in comparison to more established PV technologies like crystalline silicon and thin-film CdTe panels. Late last year, the CEO told optics.org that he was searching for a lead investor to take part in a round of financing that would support a true ramp of the technology.

Le Séguillon reiterated that plan at the March 12 inauguration ceremony, saying that the company was looking for €50 million with which to build an additional production line expected to have a capacity of 50 MW – a level that would represent a true commercial breakthrough for small-molecule OPV.

The CEO said that he was planning to close that round of financing this year with support from both new and existing investors. Among the major stakeholders in the company so far is BASF Venture Capital, a subsidiary of the giant global chemicals firm that is a key supplier of chemicals to the emerging OPV industry.

“Organic PV is an important next-generation technology for BASF,” said Dirk Nachtigal, managing director of the VC unit, highlighting the strategic importance of the sector for the parent company.

One of the priorities for Heliatek is to keep increasing the efficiency of its cells and modules, and for that it will be relying on innovation in chemistry from the likes of BASF. At the moment, Heliatek’s best result is a small-scale tandem cell with a conversion efficiency of 9.8%.

That represents a world record for OPV, but is far lower than more established technologies – a fact highlighted within the past week by Suntech Power, the world’s largest supplier of PV products by volume, as it announced crystalline silicon cells verified with 20.3% conversion efficiency, while thin-film CIGS specialist SoloPower has set a new benchmark for flexible panels at 13.4%.

The key advantage of the organic technology is that it should be far cheaper to produce, and much lighter and thinner than silicon panels. Much like the organic LED televisions from LG and Samsung that are expected to make their debut in the commercial market later this year, Heliatek’s panels are exceedingly thin and will weigh just half a kilogram per square meter.

The pilot production plant will go a long way to establishing that OPV panels with a relatively high efficiency can be scaled to volume.

Heliatek’s long-term goal is to reach conversion efficiencies of 15%, for which it will need chemicals with an absorption spectrum stretching further into the blue and near-infrared ranges. In December, the company said that its best modules had so far shown a conversion efficiency of 7.5%.