Missions under development with the European Space Agency are set to feature a number of laser instruments. 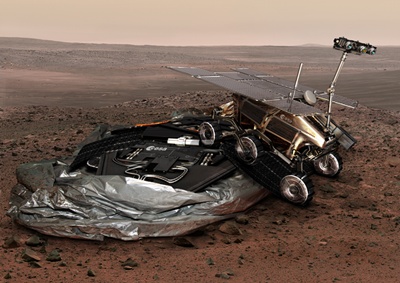 While NASA’s 2013 budget request includes funding for the James Webb Space Telescope (JWST) ahead of a planned launch in late 2018, a casualty of that program’s huge overspend now looks to be the ExoMars missions.

The total budget for the successor to the Hubble Space Telescope has swelled to $8.8 billion (including the cost of its first five years of operations), and JWST became something of a political football last year after a comprehensive review highlighted some major organizational problems.

In its 2013 budget request, NASA admitted as much, but added that things had changed following an overhaul of management last year. “Communications have greatly improved between Headquarters, Centers, and contractors, particularly at senior management levels,” stated the administration. “There now is open and honest dialogue, quick identification of issues, and agreement on fixes.”

If all now goes according to plan, JWST will launch in October 2018 from French Guiana. While all mirror fabrication and vacuum thermal testing is now completed, and backplane construction is said to be nearing completion, there is still plenty to be done.

One of the next priorities will be assembling the optical telescope element (OTE) backplane support fixture, while an optics-related risk to the mission identified by NASA includes whether or not the double pass auto-collimating flat test will work to sufficiently tight performance.

Announcing the planned 2013 budget, NASA chief and former astronaut Charles Bolden admitted that spending constraints had made some tough choices inevitable. “This means we will not be moving forward with the planned 2016 and 2018 ExoMars missions that we had been exploring with the European Space Agency,” Bolden said, confirming wide speculation that the planetary missions could pay the price for JWST’s overspend. NASA had been due to provide the launch vehicle for the ExoMars trace-gas orbiter mission, among other responsibilities.

ESA response
When contacted by optics.org for its response to NASA’s withdrawal, ESA referred to comments from its director general Jean-Jacques Dordain in an interview with Space News, in which the agency chief said that ESA did not want to end industrial work on the two missions as that would mean losing an already substantial investment.

Delaying each of the two missions by two years would also be very expensive, but there is now an obvious shortfall in a project already expected to cost ESA around €1 billion. Nevertheless, Dordain has said that ESA will push ahead with involvement from Russia instead of NASA. But while Russian expertise may be sufficient to provide a launch vehicle, it does not currently extend to the critical requirement of a landing system for Mars.

The ExoMars project includes a number of photonics tools, primarily for analytical chemistry applications designed to investigate the composition of Martian rock and, for the first time, enable analysis below the surface.

Under development are a laser-based mass spectrometer and a combination Raman/laser-induced breakdown spectroscopy (LIBS) tool, as well as an interferometer, a number of imagers plus hyperspectral, infrared and UV-visible spectrometers.

While it has withdrawn from the ExoMars missions specifically, Bolden did stress that missions to the red planet were still important to NASA, with possible new activity before the end of the decade. “We will develop an integrated strategy to ensure that the next steps for Mars exploration will support science as well as human exploration goals, and potentially take advantage of the 2018-2020 exploration window,” he said.

Ongoing Mars missions include the Mars Science Laboratory (MSL), which is set to land on the planet in August 2012, while the Mars Atmosphere and Volatile EvolutioN (MAVEN) mission is scheduled for a 2013 launch. Designed to explore Mars’ upper atmosphere, ionosphere and interactions with the sun and solar wind, MAVEN’s instruments include a UV spectrometer.

NASA added that it will also be ending work on the ExoMars trace-gas orbiter and the Mars Organic Molecule Analyzer (MOMA) missions shortly, but said that it would look to take advantage of the favorable relative location of Mars and Earth in 2018 and 2020, with pathway options for missions later in the 2020s.

The administration said that it would identify the first such mission in its fiscal 2014 budget request, due this time next year.

Meanwhile ESA is scheduled to deliver an estimate of the new cost of ExoMars without NASA’s involvement next month – and the agency is also due to decide on whether to extend or cancel the mission development contract with primary contractor Thales Alenia Space.