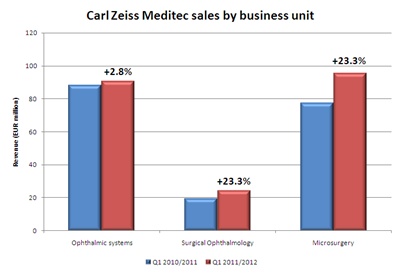 Germany-based medical technology firm Carl Zeiss Meditec has reported a strong increase in sales for the opening quarter of its fiscal year 2011-2012, thanks to strong demand in Eastern Europe and fast-growing sales from its “microsurgery” business unit.

For the three months that ended December 31, 2011, the company, which is headquartered in Jena, reported sales of €210.3 million, up 13.5% over the same period in 2010. With margins also on the up, Carl Zeiss Meditec posted earnings before interest and taxes (EBIT) of €28.3 million, up from €24 million a year earlier.

Regionally, Europe now represents the largest revenue-generator for the company, with sales up nearly 19% year-on-year to reach €75.3 million - enough to overtake the Americas region, which grew 7.8% to €73.9 million.

While sales from two of its business units – surgical ophthalmology and microsurgery – grew very strongly year-on-year, Carl Zeiss Meditec’s ophthalmic systems division performed less well, with sales up only 3%. As a result, the microsurgery unit is now the company’s largest by revenue.

Since the end of the financial quarter, there have been more important developments regarding the company’s “Cirrus” high-definition optical coherence tomography (HD-OCT) range of medical imaging equipment.

Cirrus was the subject of a pending patent litigation battle that has now been settled out-of-court. Carl Zeiss Meditec initially brought the case, against its much smaller Californian rival Optovue, in early 2010, but ended up deciding to settle and enter into a cross-licensing agreement in January.

Commenting on the latest financial results, CEO Ludwin Monz said: “I am delighted that we have continued on our solid growth course, in spite of the volatile environment,” and noted that growth had been achieved in all regions and business units.