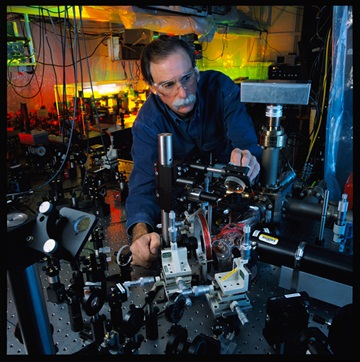 Two pioneers in the field of quantum optics have won the 2012 Nobel prize for physics.

Serge Haroche, from the Collège de France and Ecole Normale Supérieure in Paris, France, and David Wineland, who works at the National Institute of Standards and Technology (NIST) in Colorado, US, go into the history books and will share a cash prize of SEK 8 million (approximately $1.2 million).

The two scientists independently invented and developed ways to measure and manipulate individual particles while preserving their quantum-mechanical nature, in ways that were previously thought to be impossible.

Their work has already led to the development of optical clocks with unprecedented precision, and forms the basis for future quantum computers with the potential for vast computational power compared with today’s devices.

Two methods: one result
Haroche’s approach to the challenge of being able to answer the famous “Schrödinger’s cat” paradox was to control and measure trapped photons, by sending atoms through a trap.

The key elements of the experiments developed by Haroche and his colleagues was a microwave cavity formed by two supercooled, superconducting spherical mirrors made from niobium, and set at a distance of 2.7 cm apart. In 2007, Haroche and his co-workers were able to use a similar setup to measure experimentally the number of photons in the cavity, via their interaction with atoms.

Wineland’s approach to the problem was almost the reverse, using an ion trap – a technology whose development has already won the 1989 Nobel prize – combined with Doppler cooling and optical probing.

When confined in a trap, an ion oscillates between electronic states, and those levels can be coupled and interrogated through either the emission or absorption of light. Using a laser, the ion can be observed by strong scattering of light, and its internal quantum state deduced using spectroscopic techniques.

Practical applications
Unlike some Nobel prizes, these breakthroughs have already led to practical applications in the form of high-precision optical clocks. Using Wineland’s research, clocks could be based on transitions induced by optical frequencies rather than the microwave frequencies that form the basis for the more conventional caesium clocks.

In fact, Wineland and his collaborators have themselves demonstrated just such a clock, with a precision of just below 10-17. That represents an improvement of around two orders of magnitude on the best caesium clocks in use today, and the level of precision allows measurement of relativistic events, for example the dilation of time at speeds of only a few kilometres per hour.

But it is the potential for optical computing that could end up being the real breakthrough application enabled by quantum optics. Though the field remains at a nascent stage right now, computing based on quantum bits (known as “qubits”) could – in theory – lead to computational power way beyond what is possible with today’s classical devices.

The most advanced quantum computer technology yet devised is a 14 qubit system based on trapped ions, and includes a series of gates and protocols.

Eugene Arthurs, chief executive of the SPIE international society for optics and photonics, congratulated Wineland and Haroche on their awards, adding: “The ability to measure and control individual particles without changing their natures could create major, disruptive changes in how computers function, akin to the level of change resulting from the introduction of the computer in the mid-20th century.”

Meanwhile Liz Rogan, CEO of the Optical Society (OSA), commented: "The contributions by David and Serge are widely recognized in the optics community and their work has had significant effects on our understanding of particles and their quantum states. Without [their] research, innovation and achievements, quantum physics would not be where it is today.”

Haroche and Wineland will receive their medals from King Carl XVI Gustaf of Sweden in Stockholm on December 10. They follow a long line of other optics pioneers in the Nobel hall of fame. Notable recent recipients include Charles Kao for his work on light transmission in optical fibers, as well as Willard Boyle and George Smith for inventing the CCD camera, and Saul Perlmutter, Brian Schmidt and Adam Riess, who shared the 2011 prize for their 1998 discovery that distant supernovae were not as bright as had been expected – and the implication that the universe was expanding at an ever faster rate.