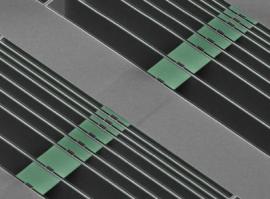 Accelerometers are increasingly ubiquitous in consumer devices and industrial applications, largely as a result of the advances in MEMS manufacturing techniques that have allowed the sensors to become smaller and more sensitive.

Most are based on detecting the motion of a test mass when it experiences movement or acceleration, and designs using optical technology to carry out that task have been available for some time.

But it has proven difficult to incorporate such devices into chip-scale systems, or to ensure that they demonstrate sufficient bandwidth - the number of reliable readings taken in a short space of time.

A US team from CalTech and the University of Rochester has tackled the problem by developing an optomechanical accelerometer that uses a nanotethered test mass and a photonic-crystal nanocavity, a design the team believes "sets the stage for a new class of motional sensors." The work is published in Nature Photonics.

"What our work really shows is that we can take a silicon microchip and scale this concept of a large-scale optical interferometer all the way down to the nanoscale," said Oskar Painter of CalTech. "The key is this little optical cavity we engineered to read out the motion."

On the upper edge of the test mass, the crucial photonic crystal nanocavity is implemented in what the team call a "zipper" configuration, so named because its dual silicon nanobeams are able to move closer together or further apart when the test mass moves.

In use, laser light guided into the system bounces back and forth between holes in the nanobeams. Any movement of the tethered mass changes the distance between the two nanobeams, which in turn alters the intensity of the laser light being reflected out of the system. This effect turns out to demonstrate an impressive sensitivity to motion of the test mass.

"With a demonstrated acceleration resolution on the order of a few µg Hz-1/2 and a bandwidth above 25 kHz, the zipper cavity device shows performance comparable to the best commercial sensors," say the team in the published paper. "These devices, formed from a silicon chip, also allow for the integration of electrostatic tuning capacitors and the replacement of expensive tunable lasers by cheaper fixed-wavelength sources."

Chip integration
Significantly, the new design also features strong optomechanical backaction, a phenomenon in which the action of the laser light itself softens and damps the motion of the proof mass.

"Most sensors are completely limited by thermal noise or mechanical vibrations," said Painter. "They jiggle around at room temperature, and applied accelerations get lost in that noise. In our device, the light applies a force that tends to reduce the thermal motion, effectively cooling the system."

In the nanoscale environment of the new device, the cooling effect can be substantial; Painter said that the new device was effectively cooled to a localized temperature of 3 K, about -270 °C. This in practice increases the range of accelerations that can be measured.

"We made a very sensitive sensor that, at the same time, can also measure very large accelerations, which is valuable in many applications," Painter said.

The team envisions its optical accelerometers becoming integrated with lasers and detectors in silicon microchips, something that has been a goal of microelectronics developers for several years.