Key market for laser and photonic equipment vendors will grow 23% this year, not 31% as previously expected. 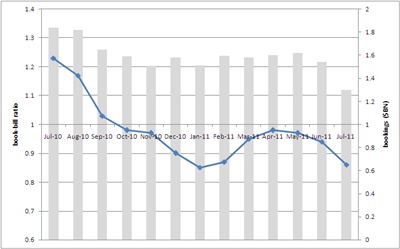 Spending on semiconductor capital equipment will reach its highest level ever in 2011, but fall short of earlier expectations. That’s according to the latest adjusted forecast from the Semiconductor Equipment and Materials International (SEMI) organization, which closely tracks demand in the sector.

Semiconductor industry demand is one of the key OEM markets for photonic products and laser systems, and has been a major factor in driving sales at major photonics companies such as Coherent and Newport over the past several quarters, as semiconductor manufacturers have invested heavily in capacity.

Now SEMI predicts that total capex for 2011 will reach a record $41.1 billion. “This new prediction is revised downwards to a 23% increase (from a 31% increase predicted in May 2011), as some companies have adjusted plans due to broader economic conditions,” announced SEMI in its report.

For 2012, SEMI is currently expecting a relatively modest decline in spending, although reports suggest that many chip manufacturers are currently evaluating their plans. So far, says SEMI, some companies have cut capex plans for 2011, but many have left their plans unchanged and some have even announced increases. Nevertheless, caution is becoming more apparent in the market, it adds.

More new fabs
SEMI closely monitors the construction of new semiconductor fabs, including LED production facilities, and here it still sees good progress being made. In May 2011 it noted that 61 construction projects were under way, but that figure has now grown to 72. Since it takes around 18 months to bring a semiconductor fab up to volume production, that indicator suggests future growth in equipment purchasing for new builds.

In its latest rolling monthly data, compiled from information provided by North American semiconductor equipment producers, SEMI reported a book-to-bill ratio of 0.86 for July 2011. That represents the lowest figure since January 2011, and although the level of bookings remains far higher than was seen during the financial crisis of 2008 and resulting downturn, average bookings of $1.3 billion in July were down 16% from the previous month.

One important trend identified by SEMI in its latest report is the changing picture in geographical spending. The organization says that Korea will take over from the Americas as the leading area in 2012, spending more than $10 billion on fab equipment - just ahead of Taiwan.