LED lighting: taking over the foodstore

Semiconductor lighting is widely used in freezer cabinets - now, says Nualight, it is spreading to chiller cabinets and even fresh food displays. 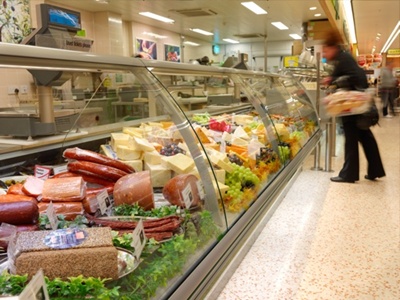 As consumers, we are used to the tempting smells of freshly baked products from in-store bakeries as a tactic to get us to pick up more produce. But have you ever wondered if the way the food is illuminated makes a difference to what you purchase? For companies such as Ireland’s Nualight, showing food off in its best light is big business. In fact, the market for lighting in food retail is rapidly on the way to reaching the $1billion mark.

Nualight was founded in 2004 and claims to be the only LED lighting company that specializes exclusively in lighting for food retail displays. In the last two months alone, Nualight has acquired the Dutch accent lighting company Lumoluce (a move which is expected to take Nualight’s revenues above €25 million for 2011, and its staff count to more than 200), and won a multi-million pound deal that will see its LED lighting being implemented in freezers and ice-cream cabinets in 800 Co-operative stores in the UK.

Lighting in food retail may be a niche market, but it is a surprisingly large and active sector: “Our compound annual growth rate for the last few years has been 100% or more,” Liam Kelly, Nualight’s CEO, told optics.org.

“To date, we have been more focused on lighting for chillers and refrigerators. The Lumoluce deal adds complementary products to our own, and moves us to the front-end of the store to lighting that sits over fresh produce such as bread, fruit and vegetables. The acquisition allows us to offer full-store lighting solutions for food retail.”

Freezers to front-end
Nualight designs and manufactures two core product platforms: display-case lighting and accent lighting. Display-case lighting includes products specifically designed for use in freezer and chiller doors, serve-over counters and self-service cases - and is the foundation on which Nualight has built up its business. Accent lighting typically comes in the form of spotlights that are used to accentuate high-margin fresh food displays such as fruit, vegetables, meat, fish and salads.

“Accent lighting is currently an early-stage market but it is widely expected to be the next opportunity for LED technology,” commented Kelly. “The acquisition of Lumoluce accelerates our expansion into this market, which is predicted to grow rapidly as food retailers continue to transition to energy-efficient LED lighting.”

Even in these tough economic times, it is heartening for the likes of Nualight to see that retailers have got the message that the returns are there if energy-efficient lighting is adopted.

“There is hardly a major retailer out there that is not trialing LED products across all areas of their store,” said Kelly. “The message is out there about LEDs and it is being understood. The vast majority of new freezer cases in North America now have LED lighting and it is becoming that way in Europe. With LEDs improving, it now makes perfect sense to put them in chillers, where the cost benefits take longer to feed through. We expect to see LEDs replacing fluorescent lighting in chillers.”

LED benefits
LED lighting is particularly appropriate for freezer applications because of the vast reduction in energy use that can be achieved. If you have inefficient lighting in a freezer cabinet, aside from the energy wasted in lighting itself, all of the excess heat produced must also be removed by the refrigeration system. Not only do LEDs deliver greater efficiency and less heat to deal with – like any semiconductor they also work better and last longer in a cooler location, thanks to a reduced junction temperature.

In recent years, leading global food retailers including Walmart, Tesco, Kroger and Supervalu have all replaced fluorescent lighting with LEDs in their frozen food displays, yielding energy savings of up to 70%. Nualight’s customers also include Migros, Sainsburys, The Co-operative Group, Tengelmann, Stop and Shop and Carrefour.

“Modern food retailers are operating in a very active and competitive market and lighting really does make a difference,” said Kelly. “As well as the energy and maintenance savings, lighting lets retailers accentuate their produce. It is a vital part of the business today.”

With this is mind, we could see more acquisitions. “We have ambitions about the size we want to get to,” said Kelly. “It does require continued growth and we are confident we can make that happen. The Lumaluce acquisition is part of that rationale and further acquisitions are not out of the question.”

Jacqueline Hewett is a freelance science and technology journalist based n Bristol, UK.