Carl Zeiss takes ablation out of the equation

The ReLEx femtosecond laser system for refractive surgery cuts a lenticle inside the cornea and leads to a less invasive procedure. 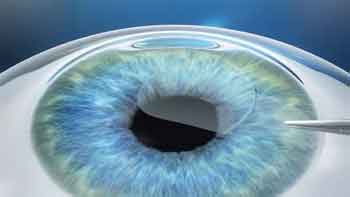 Conventional LASIK refractive surgery involves cutting a flap in the cornea of the eye and folding it back, in order to ablate the tissue underneath it with an excimer laser. A new femtosecond laser-based technique unveiled by Carl Zeiss Meditec at the Vienna Congress of the European Society of Cataract and Refractive Surgeons takes a less invasive approach.

Rather than cutting a flap, ReLEx smile cuts a lenticle, or small lens-shaped section, inside the still-intact cornea. This section is then removed through a small incision.

"The shape of the lenticule cut by the laser can be compared to that of a very small contact lens," Ronald Wendenburg of Carl Zeiss Meditec told optics.org. "It is cut in the inner layer of the intact cornea, in the corneal stroma. Once it is completed, a small extension to the outer surface of the cornea is made, to create a tunnel for the extraction of the lenticule."

This technique ensures that the length and diameter of the incisions involved are much smaller, so that more of the corneal tissue is left untouched. Carl Zeiss Meditec calculates that ReLEx smile requires an 80 percent smaller surface incision in the upper cornea and a 30 percent smaller lamellar incision than alternative methods. It allows the biomechanical stability of the vital upper layers of the cornea to remain largely intact, making for a more gentle and minimally invasive operation for the patient.

Because the treatment operates by cutting inside the intact cornea instead of through ablation, ReLEx is also more independent of intra-operative ambient conditions. The predictability of the results is claimed to be superior, which is particularly beneficial in surgeries involving high refraction values of up to -10 diopters.

The company's hope is that the minimally invasive character and gentle treatment procedure involved could potentially convince patients who might be hesitating to undergo refractive laser surgery to go ahead with the operation.

First cut is the smallest
Carl Zeiss Meditec already markets a related technique called the ReLEx flex technique, a refractive surgery that also employs a femtosecond laser. ReLEx flex is similarly based on lenticule extraction, but makes a larger access incision comparable in size to a LASIK flap. In contrast, ReLEx smile uses the laser to make a much smaller incision, only 2 to 4 mm long, through which to extract the lenticle.

"The femtosecond laser is necessary to achieve an extremely high localisation of the laser-tissue interaction, based on a nonlinear effect at a low level of average energy." said Wendenburg. "This precision is the basis of creating a lenticule shape with low shape distortion and smooth surfaces."

The ReLEx system already has CE approval in Europe and in several other countries and regions, according to Wendenburg, who also said that an FDA approval process had started in the United States.

In a separate announcement, Carl Zeiss Meditec announced its intention to acquire the intraocular lens and ophthalmic viscoelastic devices business of IMEX, Spain, to strengthen its sales, service and support network in that country. The company noted that Spain has always been an important market, and that the surgical ophthalmology business developed by IMEX had expanded to Portugal in recent years.

• The Bausch + Lomb Victus femtosecond platform for both refractive surgery and cataract removal was presented at the same ESCRS Congress, demonstrating the continued attention being paid to femtosecond laser technology within the ophthalmology space.